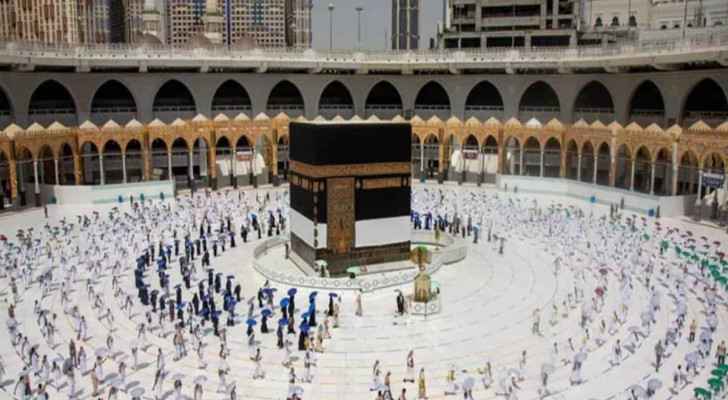 Muslims in the Grand Mosque in Makkah Al-Mukarramah performed the first prayer without social distancing since the beginning of the spread of the coronavirus about a year and a half ago, with the Kingdom starting to ease the measures related to combating the epidemic.

Video footage published by official media showed the process of removing the distancing stickers inside the corridors, courtyards and facilities of the mosque, before worshipers lined up next to each other to perform the dawn prayer, shoulder to shoulder.

Saudi Arabia closed the mosque in March 2020, then reopened it to pilgrims under strict measures in July, before allowing, after three months, all Muslims to pray in it, but with a limited capacity and distance during prayers.

Sunday, the mosque that houses the Kaaba, the qiblah of Muslims, returned to receive worshipers at its full capacity and without any distancing, although the mask is still mandatory. Also, touching the Kaaba in the middle of the mosque’s courtyard, as was the case before the virus, is still prohibited.

Millions of Muslims flock to the mosque throughout the year to pray there and perform the Umrah, which was suspended for months last year. Saudi Arabia organized two exceptional Hajj seasons, as the numbers were limited to a few thousand in 2020, and then rose to tens of thousands this year, but only for those who are immune from the virus.

The epidemic caused the Kingdom to lose a major source of revenue for months, as Saudi Arabia earns about $ 12 billion annually from Umrah and Hajj, and it also hampered the Kingdom’s plans to transform into a tourist country as part of a strategy to diversify the economy to stop the dependence on oil.

The kingdom first started issuing tourist visas in 2019 as part of an ambitious campaign to change its hard-line image and attract visitors. Between September 2019 and March 2020, 400,000 tourist visas were issued.

The kingdom slowly reopened its doors at the beginning of 2021, and began to welcome vaccinated foreign tourists since August 1.

Saudi Arabia decided to ease the measures to combat the virus with a decrease in the daily infection rate, starting from Sunday, including making masks optional in public places and the return of sports stadiums to receive fans who are immune from the virus at their full capacity.

Since the beginning of the virus, the Kingdom has recorded about 547,000 infections, including 8,760 deaths.