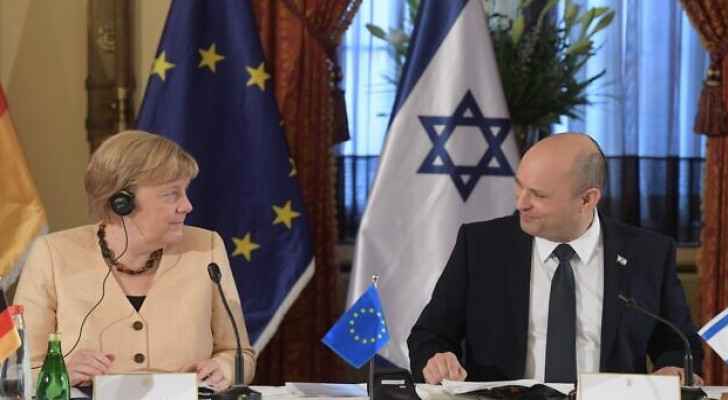 Chancellor Angela Merkel said Sunday in Jerusalem that the Israeli Occupation's security will remain a priority for "any German government," on the occasion of an official visit to the Hebrew state as part of a farewell tour before her withdrawal from political life after spending 16 years in power.

Dressed in a black suit, Merkel laid a wreath at the Yad Vashem Holocaust memorial.

She wrote in the site's visitor's book that each visit to this monument "affects me anew".

"The crimes documented here against the Jewish people are a constant reminder of the responsibility that we Germans bear, and a warning," she added.

For his part, President Bennett, who hosted the German chancellor all day, described Merkel as "the conscience of Europe," praising her support for the Israeli Occupation, and stressed that the relations between the two countries have become "stronger than ever."

He said she is a "true friend of Israel."

"After the Holocaust crimes against humanity, we were able to re-establish and build relations," said Merkel, sitting next to Bennett in a Jerusalem hotel.

She stressed that "the issue of Israel's security will always be of central importance and a central issue for any German government."

She added that it was "impressive" that the Israeli Occupation trusted post-war Germany, but that "this confidence must always prove itself."

Bennett credited Merkel with fostering an unprecedented relationship between the two countries, calling her "Europe's moral compass" because of her support for the Israeli Occupation.

The visit was originally scheduled for August, but was postponed in the midst of the withdrawal of US and international forces, including German forces, from Afghanistan after the Taliban movement took control of the country.

Bennett said he would discuss with Merkel "threats and challenges in the region, especially the Iranian nuclear file and the importance of preserving the State of Israel ... and bilateral issues."

- "The fact of the elemental chapter" -

Merkel is not scheduled to visit Ramallah, where the headquarters of the Palestinian Authority headed by Mahmoud Abbas is located in the occupied West Bank, although Germany supports the "two-state solution."

More than 675,000 settlers live in East Jerusalem and the West Bank, which have been occupied by Israel since 1967.

Despite her outspoken opposition to settlements, Merkel faces criticism from human rights activists who accuse her of not adopting a firm stance in this regard.

"We may disagree on whether there should be a two-state solution with the Palestinians, but I think we are united on the view that in the long term there should be a Jewish and democratic state of Israel," the German chancellor said on Sunday.

Bennett reiterated his opposition to the establishment of a Palestinian state, stressing that it "will most likely become a terrorist state seven minutes from my house."

He emphasized that he would instead focus on improving the Palestinians' economic conditions.

He said that "the continuation of this illusion allowed the Merkel government to avoid dealing with the reality of apartheid and the oppression of millions of Palestinians," stressing that "it is imperative for the new German government to put human rights at the center of its policy regarding Israel and Palestine."

Peter Lintel, a political expert at the German Institute for International and Security Affairs, said that Merkel clashed at times with former Prime Minister Benjamin Netanyahu, who took power from 2009 until last June, because of Israeli policy towards the Palestinians.

"But she kept it behind closed doors," he told AFP.

Merkel is preparing to withdraw from political life as the Social Democrats seek to form an unprecedented coalition in Germany with the Greens and the Liberals, without the participation of the conservatives led by the chancellor.

Lintel said the emerging coalition to succeed Merkel, backed by parties to the left of her Christian Democrats, might be "more critical and outspoken on issues in the West Bank in particular."

During her term, Merkel made the Israeli Occupation's right to defend itself against its enemies a priority of German foreign policy in light of her country's responsibility for the Holocaust during World War II.

In a landmark speech in 2008, Merkel lamented the Holocaust before the Israeli parliament on behalf of the German people.

"Chancellor Merkel, there was not a single moment in your long tenure when you tried to evade memory of the Holocaust," Israeli Foreign Minister Yair Lapid, the son of a Holocaust survivor, tweeted Sunday.

The Israeli Occupation opposed the 2015 agreement on Iran's nuclear program between Tehran and six major international powers, including the United States and Germany, which allowed the lifting of sanctions imposed on Tehran in exchange for curbs on its nuclear activities.

Former Prime Minister Benjamin Netanyahu has repeatedly described the Israeli Occupation's archenemy, Iran, as the greatest threat to the Jewish people since the Holocaust.

Bennett on Sunday described the Islamic Republic of Iran as an "existential threat."

Tel Aviv also views with suspicion the talks that began earlier this year between Tehran and international parties, with indirect American participation, with the aim of reviving the agreement that Washington unilaterally withdrew from in 2018.

Speaking in Jerusalem, Merkel supported Germany's attempts to restart the deal, while acknowledging that "Iran has given no indication that it is willing to resume discussions."