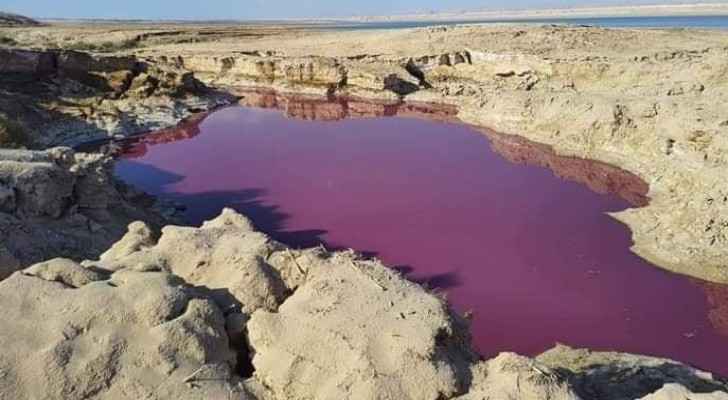 The Secretary-General of the Jordan Valley Authority, Manar Mahasneh, said that the results of the test carried out on the red water which appeared in a pond near the Dead Sea showed that the reason behind the appearance of the red color is due to the manganese found in the water.

Mahasneh confirmed to Roya that the results of the red water tests showed that the water does not pose any danger.

Earlier this month, Jordanians circulated pictures showing the appearance of red water in a pond near the Dead Sea in the southern Jordan Valley.

The media spokesperson for the Ministry of Water and Irrigation, Omar Salameh, told Roya at that time that the pond is isolated from the Dead Sea, and that technical teams will work to examine samples of water to find out why the water turned red.

The head of the Water and Agriculture Committee of the Karak Governorate Council, Fathi Al-Huwaimel, said that the authorities have been contacted to work on identifying the source of the water.

In turn, the Director of Agriculture in the Southern Jordan Valley, Yassin al-Kasasbeh, explained that this phenomenon is found in the ponds close to seas due to the presence of a certain type of a bacteria and red algae that love salinity, which changes its color with the presence of sunlight.

King departs Jordan to participate in ....