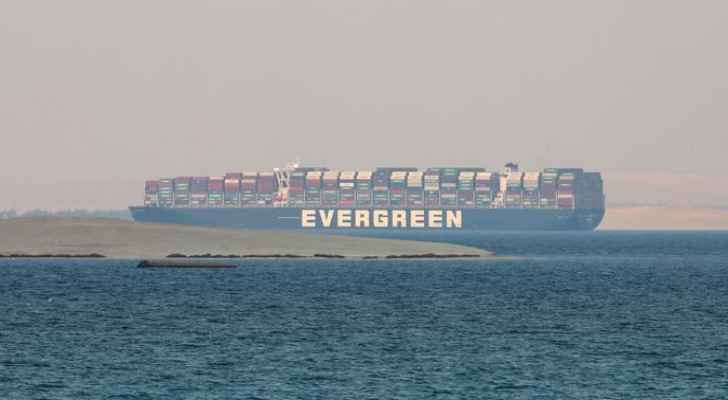 Wednesday, Cairo will release the giant container ship "Ever Given,"  after Egyptian authorities concluded a compensation agreement with the Japanese ship's owner.

The ship has been detained since the end of March after it caused disruption to navigation in the Suez Canal when it ran aground in the strategic waterway.

At the end of March, images of this ship, with has a carrying capacity of more than 200,000 tons, were seen around the world as it blocked the critical sea lane for six days.

More than three months after the accident ended, the Suez Canal Authority will hold a party on Wednesday in Ismailia, where it is headquartered, to celebrate the "signing of the agreement" for compensation and the "departure of the ship."

Sunday, the Egyptian authorities announced that they had reached a "settlement agreement" with the Japanese company, "Shui Kesen", which owns the "Ever Given," stipulating the release of the ship in exchange for Cairo receiving compensation for the losses and damages it incurred as a result of closing the canal.

The value of the settlement was not disclosed.

The authority had earlier announced reducing the amount of compensation required for losses, damages and lost profits that resulted from the ship's stranding from $916 million to $550 million.

Tuesday, the Ismailia Economic Court decided to lift the seizure of the ship, which flies the flag of Panama and is operated by the Taiwanese company "Evergreen Marine."

Sunday, the head of the Suez Canal Authority, Osama Rabie, said in a television interview that Egypt would receive from the Japanese company that owns the ship, in addition to the financial compensation, a marine tug with a tensile strength of 75 tons.

"We have preserved our rights and maintained good relations with our customers," Rabea added.

The head of the Canal Authority pointed out that the family of one of the Authority's workers who died during the floating process of the ship will also be compensated.

Navigation traffic in the Suez Canal was disrupted in both directions on March 23, when "Ever Given" ran aground during a sandstorm and stopped in the width of the canal.

The disruption of transit traffic in the canal continued for six days, and the canal authority estimated the losses incurred by Egypt as a result of the accident at between 12 and 15 million dollars per day.

More than ten locomotives, in addition to dredgers, took part in the ship's flotation operations to dig the bottom of the canal, in a very complicated process due to the rocky nature of the waterway.

- Between 6 billion and 10 billion dollars a day -

A report by the Allianz Insurance Company indicated that the disruption of the transport of goods, as a result of the suspension of navigation in the canal, "costs global trade from 6 to 10 billion dollars" per day.

The disruption to navigation led to a traffic jam in the canal and a long queue of more than 420 ships loaded with 26 million tons of cargo.

In 2020, the number of ships that crossed this waterway linking the Red and Mediterranean Bahrain amounted to about 19,000, in a movement that brought Egypt revenues of more than 5.6 billion dollars.

The Suez Canal secures the transit of 10 percent of the international maritime trade traffic, and forms a link between Europe and Asia.

On May 11, Egyptian President Abdel Fattah al-Sisi approved a project to develop the Suez Canal, which includes the expansion and deepening of the southern part of the canal, where the giant ship ran aground.

Sisi had pledged, following the Ever Given incident, to purchase all the equipment needed by the Suez Canal to face such emergency crises.