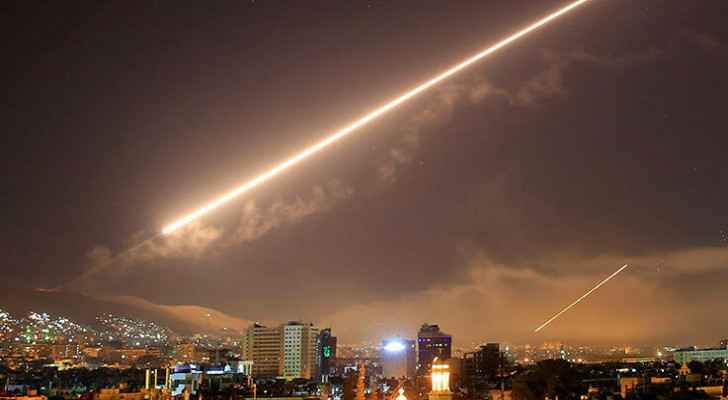 The Syrian Observatory for Human Rights stated Wednesday that at least eight Syrian regime fighters were killed in overnight Israeli Occupation raids on the Homs Governorate.

Observatory director Rami Abdel Rahman told AFP that "five Syrian soldiers and three other fighters loyal to the regime affiliated with the "National Defense" were killed in the strikes that took place before midnight on Tuesday in a number of areas, including a suburb of Homs.

He added that "the eight fighters are Syrians," noting that "others were wounded."

Abdul Rahman explained that the Israeli Occupation strikes targeted "military sites belonging to the air defense east of the village of Khirbet al-Tin in the Homs countryside (...) and an ammunition depot believed to belong to the Lebanese "Hezbollah" militia exploded in the same area."

Tuesday evening, the Israeli Occupation air force carried out raids on several Syrian areas in and around Damascus and in the governorates of Homs and Hama (central) and Latakia (west), according to the observatory.

"Our air defenses this evening confronted an Israeli aggression against some targets in the central and southern region, and shot down some hostile missiles," the official Syrian news agency (SANA) said.

The agency quoted a military source as saying that "the Israeli enemy carried out an air aggression from over Lebanese territory, targeting some targets in the central and southern region. Our air defenses confronted the aggression's missiles and shot down some of them, and the losses were limited to material."

The director of the observatory said that it was "the first Israeli strikes in Syria since the last war in Gaza."

The Israeli Occupation army, which rarely confirms its strikes in Syria, told AFP that it does not comment on "what is being reported by foreign media."

Over the past years, the Israeli Occupation has launched hundreds of air strikes in Syria, targeting in particular Syrian army sites and Iranian and Lebanese Hezbollah targets.

The conflict in Syria, since its outbreak in March 2011, has killed nearly half a million people, according to the Syrian Observatory for Human Rights.