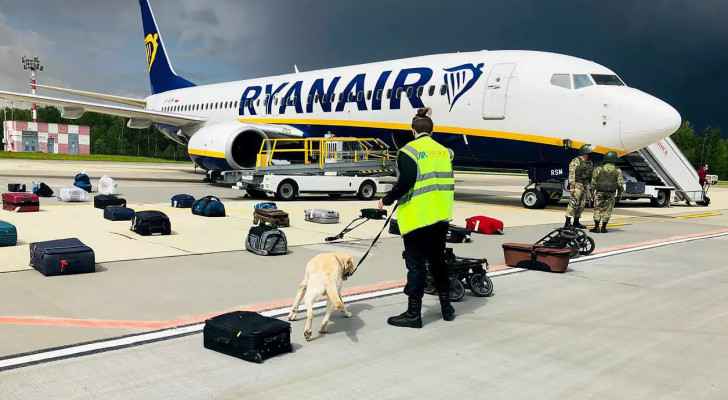 Friday, the US administration announced the imposition of sanctions on Belarus targeting the regime of President Alexander Lukashenko, which was received by his Russian counterpart Vladimir Putin in the midst of an international scandal after Belarus forced a European passenger plane crossing its airspace on May 23 to land in Minsk to arrest an opposition journalist.

A spokeswoman for the US Presidency, Jen Psaki, called for a "credible international investigation" to be opened into the rerouting of a European Ryanair plane that was heading from Athens to Vilnius.

Psaki said in a statement that these events represent a "direct affront to international standards."

She explained that the United States is preparing with the European Union "a list of sanctions against key members of the Lukashenko regime linked to the current human rights violations, corruption and fraud in the 2020 elections and the events of 23 May."

The statement pointed out that the Treasury will discuss ways to impose more sanctions on "the pillars of the Lukashenko regime and its support network."

In addition to the sanctions, the White House issued a warning to Americans not to travel to Belarus, and asked US airlines to "exercise the utmost caution" if they decided to fly in Belarusian airspace.

Washington confirmed that economic sanctions against nine Belarusian state-owned companies would come into effect on June 3, which were re-imposed in April following the suppression of pro-democracy demonstrations.

In a clear expression of support for the Belarusian regime, Putin received Lukashenko Friday in the Black Sea city of Sochi.

"I am very happy to see you," Putin said, as he welcomed Lukashenko to his summer residence.

He expressed his support when Lukashenko described the current crisis as an "emotional outburst."

He reminded reporters that very few condemnations were raised after the forced landing in Vienna in 2013 of the plane of Bolivian President Evo Morales, which was suspected of leaving Moscow with Edward Snowden, a former employee of the US National Security Agency and the prosecution in his country, on charges of leaking details of an espionage program.

"The president then got off the plane, (and after him) nothing, silence," Putin said.

Lukashenko said that “what they want from us is very clear, these Western friends,” considering that it is related to “destabilizing the situation to become as it was in August 2020, when an unprecedented protest movement broke out that shook Belarus.

The meetings in Sochi lasted more than five hours, but nothing was announced afterwards.

The rerouting operation of the "Ryanair" plane ended with the arrest of a Belarusian opposition journalist who had been exiled for 26 years.

The plane was landed after authorities warned the pilot of a bomb on board.