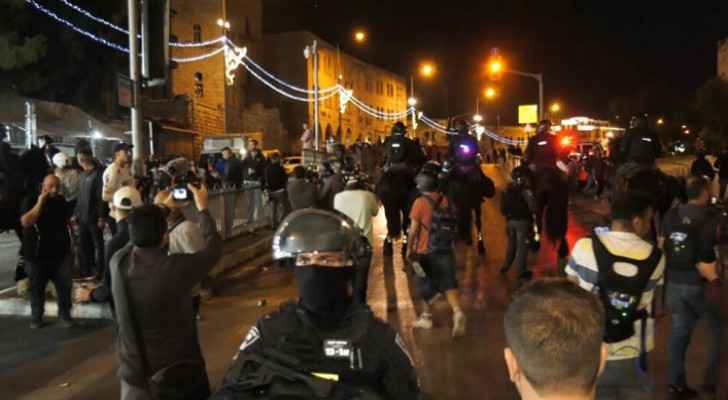 The National Center for Human Rights Sunday condemned what it described as 'systematic attacks' against Palestinians in Occupied Jerusalem. In a press release, the Center affirmed that these violations clearly and blatantly violate international humanitarian law and international human rights law.

The following is the full text of the statement:

The National Center for Human Rights condemns the systematic attacks against the Palestinians at the Damascus Gate and in separate areas of occupied East Jerusalem, as well as the use of violence against them and the massive deployment of the occupation forces in an attempt to prevent the Palestinians from exercising their right to perform their religious rituals since the beginning of the blessed month of Ramadan, and at a pace that is persistent in transgressing human, international and legal values.

In this context, the Center affirms that these violations clearly and blatantly violate international humanitarian law and international human rights law, starting with obstructing and preventing the performance of religious rites and allowing settlers to attack Palestinians and attack them and their property and try to enter the Temple Mount, as well as the policies pursued by the occupation forces for the purpose of deporting Palestinians from their city and homes, and other attacks and violations of human rights.

The Center also affirmed that what the Occupation Forces are doing in a systematic and deliberate manner contravenes the United Nations resolutions, which affirmed the special legal status of the Holy City of Jerusalem.

The Center commends the Hashemite guardianship and care of the holy sites in Al-Quds Al-Sharif, stressing its historical role in preserving these sanctities and safeguarding them from any Zionist plans.

The Center also calls on the international community to take all legal measures with the aim of stopping these violations and confronting the abuses committed by the occupation forces and protecting our people in Al-Quds Al-Sharif and in the rest of the Palestinian territories.

Private schools 'suck the blood of the Jordanian people': ....

Private schools 'suck the blood of the Jordanian ....