PM speaks on latest COVID-19 developments in the Kingdom

PM speaks on latest COVID-19 developments in the Kingdom 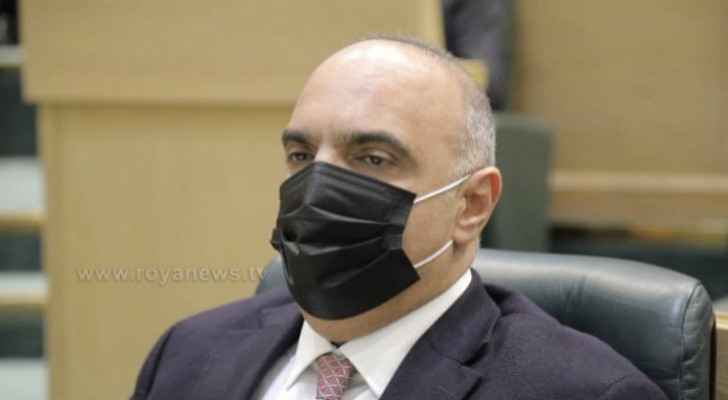 The Prime Minister, Dr. Bisher Al-Khasawneh Sunday briefed the parliamentary committee on the latest developments in the epidemiological situation in the Kingdom.

The Speaker of Parliament, Lawyer Abdel Moneim Al-Awdat, and a number of ministers, were also present.

The Prime Minister affirmed that the government has a plan to gradually reopen all sectors by July 1, 2021, and that the plan will be announced within 48 hours.

The Prime Minister indicated that intensifying the vaccination campaign in the months to come will play a key role in the plan.

According to him, the Kingdom has contracted with companies to obtain 10 million doses of COVID-19 vaccines, which will enable 150,000 Jordanians to be vaccinated per day starting May 8.

The Prime Minister pointed out that the percentage of positive examinations is still high, ranging around 10.4 percent, and it does not currently allow for the reopening of sectors.

He indicated that Ministry of Health figures demonstrate that cases would have increased 250 percent if no measures or closures were put in place.

Al-Khasawneh stressed that the decisions taken by the government are backed by scientific and health considerations and after consulting the opinion of the Epidemiology Committee and the Crisis Management Center.

The Speaker of Parliament said that the meeting, which was attended by a number of representatives, came at the invitation of the Parliamentary Committee to follow up on the recommendations of the House of Representatives, to see the latest developments related to the epidemic situation and in a way that serves and is consistent with Jordan’s health capabilities.

Al-Awdat added that the measures taken by the government related to the ban had a negative impact on various sectors, as several sectors no longer have the ability to continue working, noting that there was a parliamentary memorandum signed by 100 deputies calling for the opening of sectors.

He explained that the balance between citizen freedom and opening sectors is a controversial issue, and no country today has reached an appropriate point of balance, indicating that the only solution is to provide vaccines and for the majority of Jordanians to receive them.

Al-Awdat emphasized that the parliament and the government are partners in the national interest, but each makes different decisions within the method specified by the constitution for each authority and its powers.

The head of the Parliamentary Committee, MP Eng. Khalil Attiyah, said that the meeting came at the request of the committee in order for different proposals and opinions to be shared about the reopening sectors, the end of Friday lockdown, a reduction in curfew hours, and the ability to perform Taraweh prayers in mosques.

Attiyah added that government decisions should meet the demands of the people.

MPs also called on the government to expand the vaccine campaign, and further consider the economic impact of their decisions, and strike a better health-economic balance for Jordanian citizens.

The Minister of State for Media Affairs and the official spokesperson of the government, Eng. Sakher Dudin, indicated that there are government plans in the long, medium and short term to open sectors and ease the restrictive measures applied, such as the partial and comprehensive curfew.

He explained that the long-term plan, previously announced by the government and entitled "Safe Summer," includes opening all sectors and returning to a normal life by July.

He added that reaching a safe summer and opening sectors requires a massive turnout of citizens to receive vaccines, stressing that the government has increased the amount of mobile teams to vaccinate citizens and some vital sectors outside the designated health centers from 25 to more than 125 teams.

Dudin pointed out that the medium-term plan includes the gradual opening of sectors and reducing the hours of the curfew, both partial and comprehensive, and is expected to start on the first of next June. He indicated by June, the Kingdom hopes to vaccinate three million citizens and residents.

With regard to easing some measures during the last ten days of the blessed month of Ramadan, Dudin indicated that the government will examine the possibility of allowing citizens to perform the Isha and Tarawih prayers.

He said that the government will take into account some ideas and advice presented by some members of Parliament during the closed session held today.

Dudin reiterated that the government strives to preserve the health of citizens whilst keeping in mind their economic needs.

Dudin also indicated that the government has developed a plan to give vaccines to teachers in coordination with the Crisis Cell at the National Center for Security and Crisis Management.

With the plan, vaccination teams will go to schools to give vaccinations to educational staff, with the hope that all teachers are vaccinated by the end of September, which is quintessential for the stabilization of the education sector, and children returning to their schools.

Dudin to Jordanians: We do not want to turn Eid into a ....

Dudin to Jordanians: We do not want to turn Eid ....

Dudin to Jordanians: We do not want to turn Eid ....