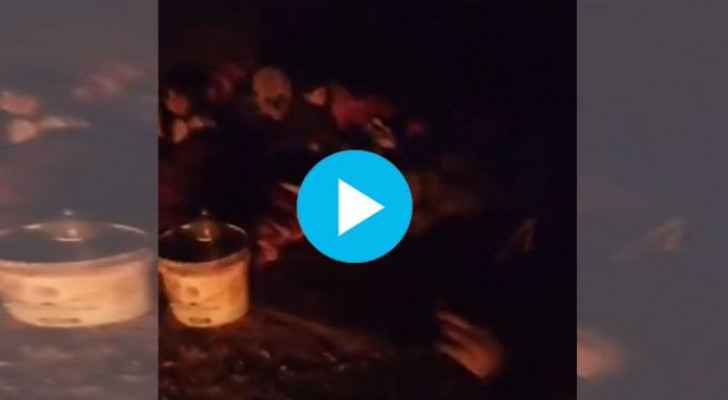 A clip circulated on social media Friday of a family in Mafraq that was evicted from their home, sparking sympathy among Jordanians online.

The footage showed three young children wandering outdoors in the cold. Agonizing screams were coming from one child, who seemed increasingly distressed.

The individual who recorded the video can be heard saying, "In the name of Allah, the most gracious and the most merciful, we are currently in an area in Mafraq where there is a family who used to rent [accomodation] in Mafraq, and as you can see it is night time and the weather is very cold."

He explained that the family was using tires to light a fire.

The individual recording the clip asked a young girl, who identified herself as six-year-old Rand, if she felt cold. She nodded her head and stated she had not eaten either.

Upon speaking to the father, the video publisher found out that one of the children has autism.

"I cannot afford to [help treat him]," said the father, explaining that he owed six months worth of rent.

He said that all concerned parties were informed of his predicament in Mafraq, including the governor and the director of social development.

In turn, the Minister of Social Development, Ayman Mufleh, said he is heading to Mafraq to look into the matter.

Notably, Mufleh announced in December that 250,000 Jordanian families' incomes were affected by the pandemic and were unable to meet basic living costs, including rent, bills and food.

Upon finding out details, Mufleh, revealed on Twitter that it was found that the owner of the house did not evict the family from their home, but rather there was a rent issue, which led the family to leave the house for two hours and sit outside.

He noted that the matter will be resolved in all aspects Saturday.

The footage can be found below, however, it is in Arabic.

Twelve hospitalized due to gas leaks in ....

Israel orders the evacuation of houses in Northern Jericho

Israel orders the evacuation of houses in ....

Israel orders the evacuation of houses in ....

Israel orders the evacuation of houses ....