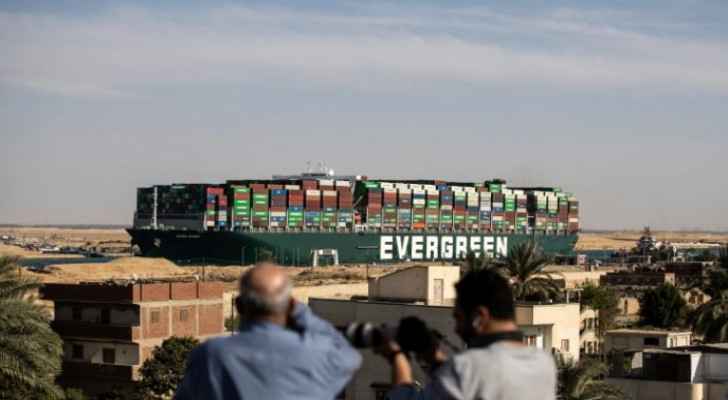 Sources in the shipping industry said Tuesday that shipowners and charterers who were unable to pass through the Suez Canal for about a week due to the 'Ever Given' running aground and blocking all shipping courses March. 24, are facing financial losses of no less than $24 million, which they will not be able to recoup because their insurance policies do not cover them.

According to Sky News Arabia, up to 400 ships, including oil tankers and ships carrying consumer goods suspended in the canal, are working on counting the cost after traffic stopped in that vital waterway for six days.

The Suez Canal Authority said a giant container ship that had blocked the waterway was refloated on Monday.

Ships usually have a variety of insurance contracts, including protection claims and compensation for pollution and injury. Separate policies for hull, machinery and equipment insure ships and containers against physical damage.

Shipping sources said daily expenses were estimated to reach between $10,000 to $15,000 a day for each vessel and it would have to be written off. This includes oil tankers.

A shipping source, who requested anonymity said, "Tanker owners don’t get paid demurrage (delay costs) for canal delays, they incur the waiting days and cost on their own account."

Apart from ship owners, charterers of ships who hire the vessel for an extended period would also be unable to claim back losses, leaving them also having to cover these costs, according to Reuters.

They may also face over six days of lost expenses, including fuel costs, and days when the ship was unable to complete its journey and added supplies, as the congested ships make their way through the canal.

The managing director at the Charles Taylor insurance firm, William Robinson, stressed, “It’ll take days rather than a day to clear the backlog.”

Notably, owners of the cargo on ships may also not be covered by insurance.

The global head of marine and cargo at Marsh (insurance), Marcus Baker, confirmed the aforementioned statement, saying “Generally, if you are shipping anything other than perishable cargo, you don’t buy delay insurance.”

Additionally, Fitch Ratings said Monday that reinsurers could face devastating losses totalling to hundreds of millions of euros due to the Suez Canal crisis.

But, industry sources said insurance and reinsurance claims would likely mainly be for damage to the Ever Given ship itself and to the Canal, as well as dredging costs.

The Ever Given's protection and indemnity (P&I) insurer, UK Club, said in a statement Monday that insurance was provided to the ship owner for “certain third party liabilities that might arise from an incident such as this."

The third party liabilities include damage caused to infrastructure or claims for obstruction.

Shipping experts predict the ship will have been insured for roughly $100-140 million overall.