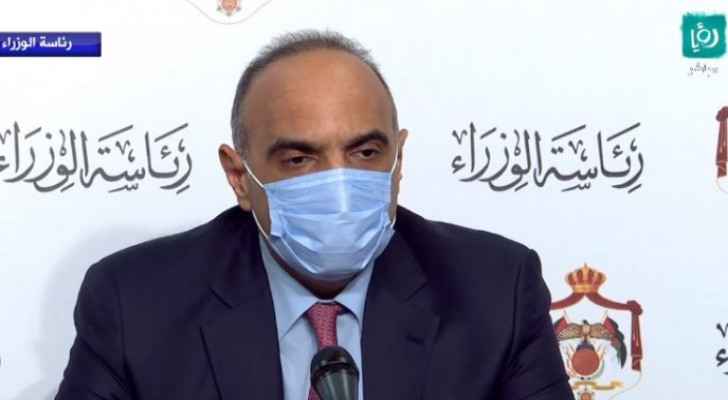 Prime Minister Bisher al-Khasawneh Thursday said that Jordan is currently at the peak of the coronavirus pandemic, as the occupancy rates in hospitals have increased in 'a worrying way.' He added that had it not been for the establishment of field hospitals, our situation would have been 'very bad' in terms of hospital capacity.

During today's cabinet session, Khasawneh stressed that tackling the pandemic is a 'national responsibility on all of us' including the government, institutions and citizens. He called on citizens and residents to register for vaccination, noting that all vaccines available in the Kingdom are safe and approved.

He indicated that hospitals in Amman, Balqa, Zarqa and Madaba are overwhelmed and the occupancy rate in them is higher than the national average. He pointed out that the COVID-19 situation in the central region is 'difficult', especially as the rate of hospital admissions continues to exceed discharges and recoveries.

He pointed out that the occupancy rate at a national level is still reasonable and under control. He noted that the national health system can deal with the steady increase in the number of COVID-19 cases, which have mostly been of the mutated variant discovered in the UK.

Khasawneh said the measures recently taken by the government were 'absolutely necessary' and they aim to improve the pandemic curve and reduce the number of cases and pressure on hospitals. These measures went along with the expansion of the national vaccination program. He stressed that compliance with these measures will allow the government to reopen sectors during the summer, start resuming life normally and improve the local economy.

He said "we are counting on citizens to abide by the measures taken by the state." He continued saying that extending curfew hours and reimposing the Friday lockdown is an attempt to reduce the number of COVID-19 cases and avoid having to impose other measures that have greater negative repercussions on citizens, the country and the economy.