Al Khaja being sworn in as ambassador in the UAE. Source: Gulf Business 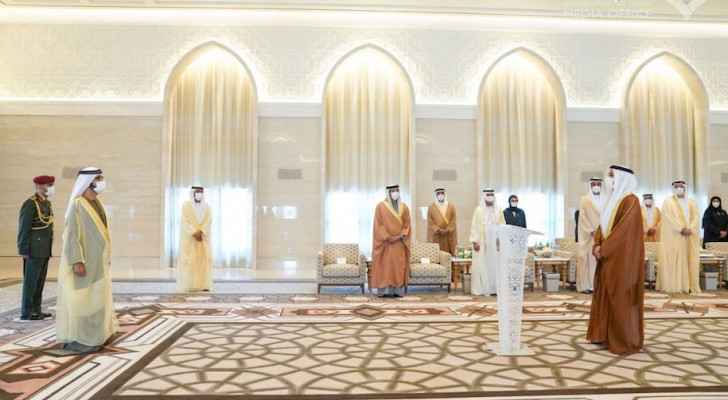 The Emirati ambassador, Mohammed Al Khaja, who arrived in the Israeli Occupation earlier on Monday, presented his credentials to Israeli President Reuven Rivlin at a ceremony in Occupied Jerusalem.

The UAE is the third Arab country to announce the normalization of relations with Israel after Egypt and Jordan.  Bahrain, Morocco and Sudan have since followed suit.

Palestinians largely believe these relations violate the Arab consensus, which made resolving the Israeli-Palestinian conflict a condition for peace with the Israeli Occupation.

Rivlin addressed the Emirati ambassador in Arabic and welcomed him, saying, "Welcome, Mr. Ambassador, welcome to Jerusalem, to Jerusalem."

"The Israeli people are happy and welcome you," he added.

"This will be your most important task (...) leaders sign treaties, but real and lasting peace is made by the peoples," the Israeli Occupation president said.

The Emirati ambassador to the Israeli Occupation, Muhammad Al Khaja, affirmed that "the historic peace agreement (...) works for concerted efforts to enhance stability and security in our region (...) and will create a better path."

"The two countries began to face challenges to regional and international security as a common goal," Al-Khaja added.

"I will work diligently to strengthen political ties between the two countries in the service of our peoples and regional stability," Al-Khaja said.

Ashkenazi wished the Emirati ambassador "success in his historic mission."

Al Khaja emphasized that "I am proud and honored to be the first Emirati ambassador to the State of Israel (...) My mission here is to strengthen and develop this relationship."

The Israeli Occupation opened its embassy in the UAE in January, headed by veteran diplomat Eitan Naeh.

The Israeli Occupation and the UAE have also previously signed an agreement that exempts the citizens of the two countries from obtaining visas to travel between them, in addition to signing agreements related to investment, science and technology.

On Tuesday, Al Khojah is scheduled to visit the Yad Vashem Holocaust memorial.

For first time, restaurants in Dubai able to serve food in ....

For first time, restaurants in Dubai able to ....

For first time, restaurants in Dubai able to ....

For first time, restaurants in Dubai ....