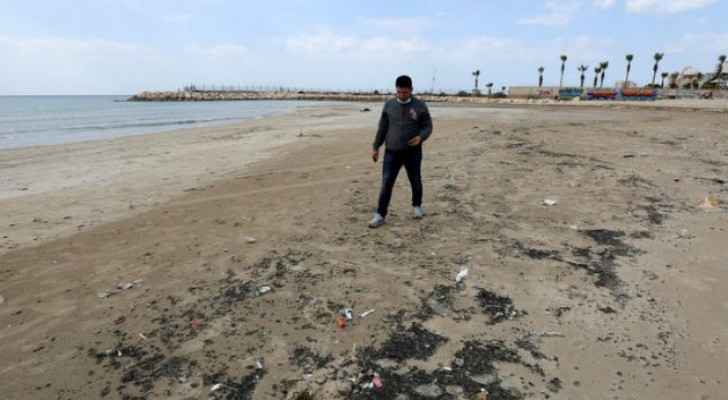 Saturday, volunteers and local organizations began the process of cleaning up parts of the Tire Beach Nature Reserve in southern Lebanon, after large quantities of tar, carried by the winds and heavy waves, washed ashore from an Israeli Occupation ship's leak over the weekend.

The Israeli Occupation, which is officially in a state of war with Lebanon, warned its residents last Sunday to approach the coast of the Mediterranean Sea with caution and to avoid the majorly polluted areas caused by the leakage of tar during the unloading of oil from a ship.

The environmental crisis extended to southern Lebanon, where tar was spotted along the beach from the border city of Naqoura to Tire. The marine area there, which includes sandy and rocky beaches and a nature reserve, is a destination for the Lebanese during the swimming season for its beauty and cleanliness. Every year, batches of young turtles are released into the deep sea.

The cleaning process began early Saturday. Volunteers from local organizations and residents of the area collected tar with shovels and brooms, while others were busy sifting the sand to extract contaminated materials and collect them in bags.

The Secretary-General of the National Council for Scientific Research in Lebanon, Mouin Hamzah, told AFP that "Tire Sandy Reserve is infected with the equivalent of two tons of tar, ninety percent of it disappeared in the sand."

It takes at least a week or two to clean the Tire Beach Nature Reserve only from polluted materials, according to Hamzah, who stressed that "it is in our interest to collect them as soon as possible so that we can save the season and the reserve's environment."

Exposure to tar or tar threatens public health and leads to the death of many marine organisms.

Hamzah expected that the oil spill would continue to reach the Lebanese coast within a period of between two and three months, explaining that the greatest damage is concentrated in Naqoura and Bayada, which are among the cleanest coastal regions of Lebanon. He also indicated that traces of leakage had been found on the Ramlet Al-Bayda beach in Beirut.

Since then, specialized teams have conducted field surveys and flown drones to assess the damage along the beach.