Biden, Johnson discuss 'cementing the alliance' between US and Britain 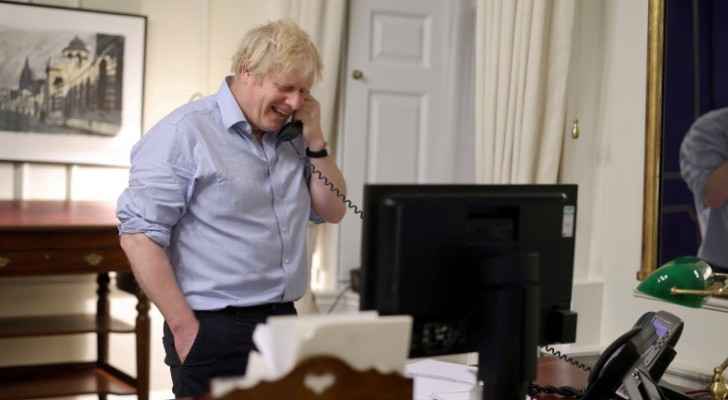 British Prime Minister Boris Johnson and US President Joe Biden pledged to consolidate relations between their countries and confront climate change, in their first conversation since Biden took office, according to a statement issued by 10 Downing Street.

The statement said that Johnson congratulated Biden Saturday on his inauguration as president of the United States, and the two leaders expressed during the phone conversation "their aspiration to consolidate the close alliance" between their countries.

British newspapers reported that Johnson was the first European leader to receive a call from Biden, who had earlier spoken to his Canadian and Mexican counterparts.

The right-wing Sunday Telegraph reported that Johnson was the first leader outside North America to speak with Biden, "after the scheduled call was brought up by two days, in a move seen as an important boost to the special relationship between the United Kingdom and the United States."

The conversation comes after the call that Biden made on Friday with Canadian Prime Minister Justin Trudeau, his first with a foreign leader as president.

In the text of the call, the White House stated that Biden "expressed his intention to strengthen the special relationship between our two countries" and also pointed out "the importance of cooperation, including through multilateral organizations (to deal with) common challenges."

Johnson posted a tweet in which he said, "It's great to talk to President Joe Biden this evening," and attached it to a picture of him carrying the phone laughing.

And it seemed that the goal behind this conversation was to warm up the cold relationship between the two men, especially since Biden was describing Johnson in 2019 as "a physically and emotionally cloned" from Donald Trump.

Biden had also criticized Johnson's Brexit policy, but the Downing Street statement indicated that the two leaders "discussed the benefits of a possible free trade agreement" between the two countries.

Johnson said he intends to resolve the current trade disputes "as quickly as possible."

Prior to his election, Biden, of Irish descent, warned that if Brexit harmed the Good Friday Agreement of 1998 that ended 30 years of violence in Northern Ireland.

Johnson praised Biden for speeding up decisions that had already been made by his predecessor.

The British Prime Minister also welcomed Biden's decision to return the United States to the Paris Climate Agreement and the World Health Organization, praising his commitment to reach zero emissions by 2050.

The two leaders expressed their hope to meet soon, and that they would work together at the United Nations Climate Summit scheduled to be held in Scotland in November.

The White House stated that common challenges include "confronting climate change, containing COVID-19 and ensuring global health security," noting that Biden intends to "revive transatlantic relations, stressing the critical role of NATO in our collective defense and our common values."

Johnson's statement stated that the two leaders affirmed their "commitment to NATO," as well as "shared values for promoting human rights and protecting democracy."

It is reported that Trump consistently criticized the alliance.

Johnson also praised Biden's decision to join the COVAX platform, which is concerned with providing vaccines against the coronavirus in poor countries.

The White House reported that Johnson and the new US president also discussed "the need for coordination on common foreign policy priorities, including (those related to) China, Iran and Russia."

Also Read: 'The dream of justice for all will be deferred no longer': Biden sworn in as 46th US president