'The dream of justice for all will be deferred no longer': Biden sworn in as 46th US president 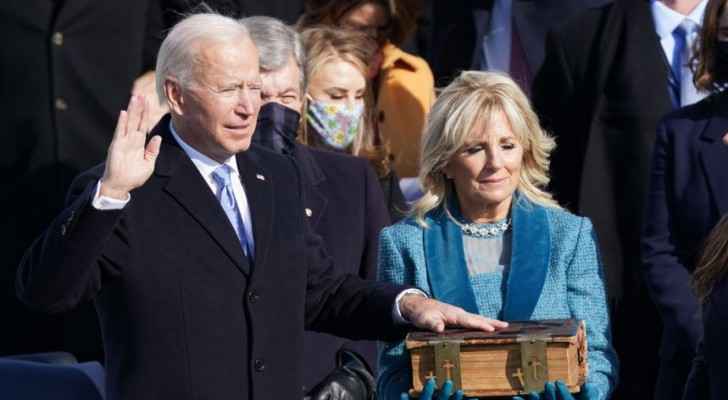 Joe Biden was sworn in as the 46th president of the United States at 11:45am EST Wednesday with a promise to unite the divided nation.

"The dream of justice for all will be deferred no longer," said Biden in his first presidential address to the American public, where he insisted on the principles of unity, respect, and democracy.

Biden faces a country that has not only been ravaged by the coronavirus, but is also deeply divided on issues of race, policing, climate change, and other social issues.

"Disagreement must not lead to disunion. And I pledge to you this: I will be a president for all Americans... and I will fight just as hard for those who did not support me as those who did."

Kamala Harris was sworn in as the vice president moments earlier, becoming the first Black and South Asian individual to hold the position. She is also the first woman.

The ceremony began around 11:15am, with Lady Gaga singing the National Anthem and Jennifer Lopez singing "This Land is Your Land," and "America, America." Garth Brooks, and Bruce Springsteen also performed.

Former presidents Barack Obama, George Bush, and Bill Clinton were in attendance, in addition to members of Congress, many of whom were clad in bullet-proof gear.

The inauguration- which comes after one of the most unconventional elections in US history- took place amid tight security in Washington, which has been operating under the threat of violence since the Jan. 6 Capitol attacks.

Twelve of the 25,000 National Guard members deployed to Washington were relieved from their duties for security concerns. Two of them were said to have 'right-wing sympathies.'

Coronavirus also altered the typical layout of an inauguration day. The spectators that normally crowd the national mall were replaced by 400,000 flags to represent the number of Americans who have died from the virus.

Biden's predecessor, Donald Trump, whose last few weeks of the presidency were largely tainted by his second impeachment, left the White House for the last time shortly after 8:00am.

He became the first outgoing president in nearly 150 years to not attend the incoming president's inauguration, insisting since November that the election results were fraudulent.

Vice President Pence did attend, which Biden applauded him for doing in the first statements of his address.

While Trump did not make mention of the unsubstantiated fraud claims in his farewell speech, his reference to the incoming administration was curt.

"This week, we inaugurate a new administration and pray for its success in keeping America safe and prosperous. We extend our best wishes, and we also want them to have luck - a very important word," he said, without mentioning Biden by name.

Within hours of his inauguration, Biden took to the Oval Office to sign, as expected, more than a dozen executive orders that reversed Trump-era policies.

The orders signed will now require masks on federal properties; ensure that the needs of underserved communities are addressed; and allow for the US' immediate rejoining of the Paris Climate Agreement, and the halting of the country's departure from the World Health Organization (WHO).

They will also stop construction on the US-Mexico border wall, and allow for the resumption of travel from countries under the 'Muslim Ban,' two widely criticized staples of the Trump presidency.

Other executive orders cancelled the Keystone XL pipeline permit, and extended the pandemic-related freeze on student loan payments, and evictions.

His Highness King Abdullah sent Biden his well wishes in a tweet saying, "Warmest congratulations to @POTUS @JoeBiden on his inauguration today. We highly value our strategic partnership and enduring friendship with the United States, and we look forward to working with you in pursuit of global peace and prosperity."