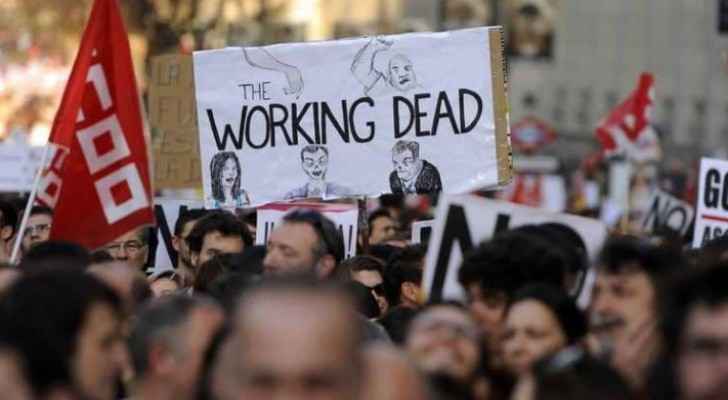 Friday, the European Bureau of Statistics, Eurostat, estimated that unemployment has affected 15,000,933 men and women in the EU, including 13,609 in the euro area.

The ‘euro area’ is the monetary union of 19 EU member states that have adopted the euro as their primary currency and sole legal tender. The monetary authority of the eurozone is the Eurosystem.

According to Eurostat Friday, unemployment rates slightly decreased in November in the euro area to 8.3 percent, but it is still rising sharply year-on-year due to the health crisis caused by the pandemic.

They indicated that unemployment decreased by 0.1 points compared to October, but it increased by about 1 point, compared to November 2019 and affected 7.4 percent of the workforce in the 19 countries of the euro area.

However, young people are the most affected by the deterioration in the labor market, as the unemployment rate for those under the age of 25 rose in November to 18.4 percent (+0.4 points) in the euro area, reversing the general trend.

Within one year, the increase reached nearly three points, and in recent months, announcements of job cuts have multiplied despite unprecedented aid plans to support the economy.

The unemployment rate in the EU followed the trend in the euro area, and settled at 7.5 percent in November, down 0.1 points from October, but up 0.9 points from November 2019.

The Czec Republic recorded the lowest unemployment rate, at 2.9 percent, followed by Poland (3.3 percent), the Netherlands (4 percent) and Germany (4.5 percent), according to Eurostat.

The re-imposition and strengthening of restrictive measures during the fall and winter in Europe raises fears of worsening economic decline and increasing unemployment rates.

On the other hand, despite the gradual recovery, German exports recorded a clear decline in 2020. The Federal Statistical Office ‘Statistisches Bundesamt’, announced at its headquarters in Wiesbaden, Germany, Friday, that despite the rise in exports by 2.2 percent, last November, compared to October, exports fell by 1.3 percent, compared to the same month in 2019.

Overall in 2020, with the exception of last December, exports fell by 10.3 percent, compared to the same period of the previous year. Federation of German Wholesale and Foreign Trade recently expected a decline in exports of at least 12 percent, for the whole year.

In 2019, Germany exported goods worth more than EUR 1.3 trillion. However, the measures imposed to close borders, disrupt logistics and supply chains at the beginning of the pandemic slowed deals with German products.

The recovery was unable to compensate for the recession, and imports to Germany decreased, compared to November 2019, by 0.1 percent, to EUR 94.6 billion, and compared to the previous month, imports rose by 4.7 percent.

Sweden bans entry to travelers from ....