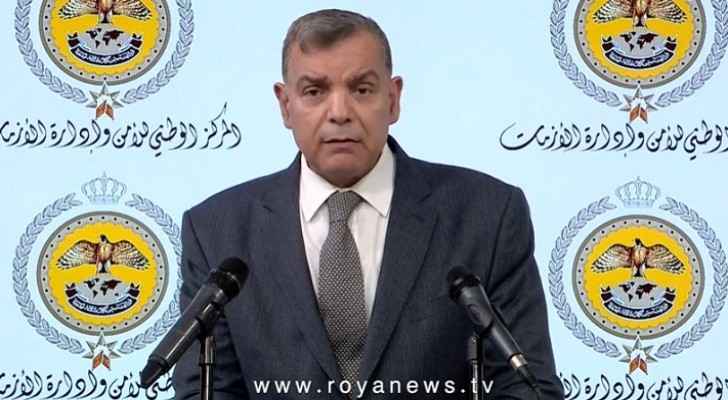 The Minister of Health, Saad Jaber, has announced that 24 new coronavirus cases were recorded in Jordan today.

During a press briefing at the National Center for Security and Crisis Management, the Minister said that the new cases are five truck drivers who were found infected at the Al-Omari borders between Jordan and Saudi Arabia, of whom two are Jordanians, a student returning from Russia and 18 people who had direct contact with the infected truck driver, where nine of them were recorded in the Al-Khanaseri area of Mafraq, three in Ramtha and six in the southern neighborhood of Irbid.

The Minister added that four recovery cases were reported today in the Kingdom, including three at Prince Hamzah Hospital and one at Queen Alia Military Hospital.

"Nearly 5,000 random tests have been conducted today, bringing the total number of tests conducted since the beginning of the crisis to 106, 314 total," Jaber confirmed.

The Minister said that "more than 22 epidemiological inspection teams are collecting samples from people in Mafraq governorate."

"The new setback in the face of coronavirus disrupted the process of easing the lockdown measures during Eid Al-Fitr holiday," Jaber stated.