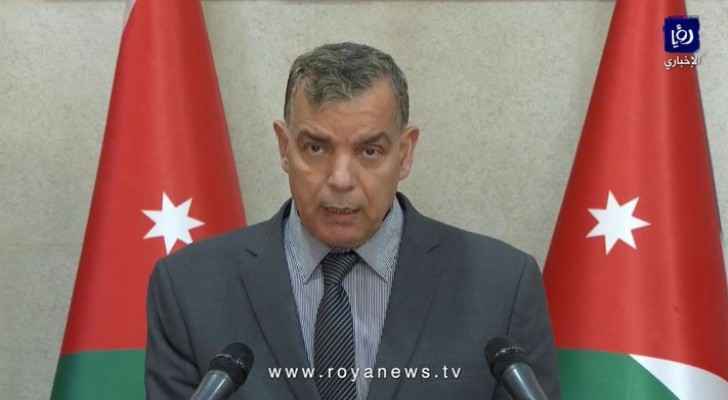 Late night on March 26, 2020, the Ministry of Health was informed that a patient at the dialysis department of a private hospital was suspected of having coronavirus as he had a dry cough, the Minister of Health, Saad Jaber, said during a press conference held today, jointly with the Minister of State for Media Affairs, Amjad Adaileh.

The patient died that day, yet he underwent a COVID-19 test and tested positive for the virus. His family members insisted on burying him before the test result was shown, according to a nurse at the hospital.

The medical personnel at the hospital immediately informed the deceased's children of the result and that all those who had close contact with him should be tested. However, his family members refused and confirmed that the deceased didn't show any symptoms of the virus.

An epidemiological investigation team rushed to the building in Al-Rashid Neighborhood, where the deceased's family resides to conduct medical tests. All the family members, including his son "Sobhi" and his wife, and the residents of the building were tested.

The Minister pointed out that the family had been asked to commit to quarantine until the results of the examination were shown. Later, Sobhi's wife was found to have the virus. Medical personnel asked Sobhi to take his wife to the isolation department at Prince Hamzah Hospital, yet he refused, arguing that she's blind, while the rest of the family members were asked to commit to home quarantine.

In coordination with the Civil Defence Directorate (CDD), the wife was transferred to Prince Hamzah Hospital after a great effort and by force, where her husband was informed that if he doesn't abide by the measures, he exposes himself to legal accountability.

Jaber stated that, based on the tests, seven cases from the same family were confirmed, as they were transferred to Prince Hamzah Hospital. In addition, the area was isolated.

When he was asked about people he had direct contact with other than his family members, Sobhi said that he went to work seven days after his father died on March 26.

Following that, the pharmacy owner was contacted to test all the employees and asking them to commit to home quarantined, the Minister said, confirming that the tests will be reconducted after 14 days.

Why the Ministry didn't make an official announcement about Sobhi's father's death? The Minister explained that the test result was not shown when he died and the deceased had been immediately buried as his children refused to wait for the results.

Official: Pharmacy employee infected with coronavirus fully aware that his dead father had the virus