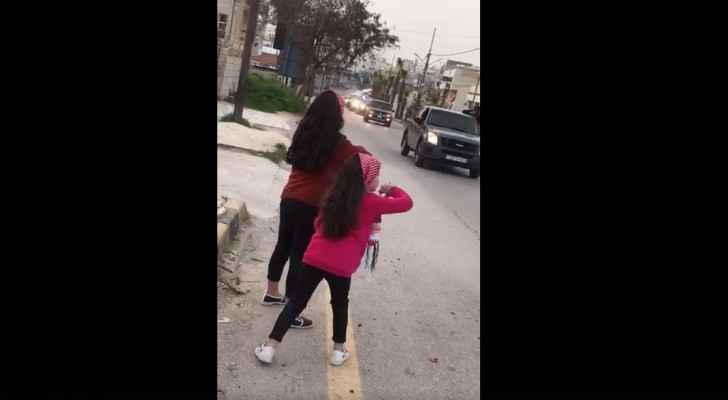 With love and flowers, this is how two young Jordanian girls welcomed the police and Jordan Armed Forces (JAF) members who passed by their place of residence a couple of days ago.

In a video posted on Roya TV official Facebook page, that received millions of views, reactions, and comments, the girls appear spreading rose petals at the police and army vehicles, as a way to express their love and appreciation to their efforts in keeping the country safe amid these exceptional circumstances, as a curfew has been imposed in the Kingdom for nearly two weeks due to the spread of coronavirus in the country.

The Jordanian government decided to impose a curfew in the Kingdom when the total number of COVID-19 cases reached 84.

Since that moment, the Public Security Directorate (PSD) and the JAF have been making every effort for the safety of citizens and the country.

On March 18, the PSD launched "#Stay_Home" or "#خليك_بالبيت " (in Arabic) campaign as a mean to limit the spread of the virus and to raise awareness among people.

The PSD said, "Let's all write "#Stay_Home" or "#خليك_بالبيت " on a piece of paper. Take a photo of you with the paper and send it to us so we can share it or you may post it on your personal social media accounts."

"Today, it is my role and your role to preserve our country and commit to the measures for the sake of the homeland... take a photo and send it to us and don't forget to "Stay_Home."

On March 28, the Community Police Department at the PSD launched the "Safe Distance" initiative to urge citizens and owners of stores, authorized to open, to adhere to health guidelines.

As part of the initiative, members of the Community Police and JAF draw marks on the sidewalks at the front of shops across the Kingdom to urge people to practice social distancing.

Crown Prince follows up on procedures to curb coronavirus

Crown Prince follows up on procedures ....

Pink, red, or yellow? Here's what each rose color means