Razzaz: Government will take more measures based on the evolving circumstances

Razzaz: Government will take more measures based on the evolving circumstances 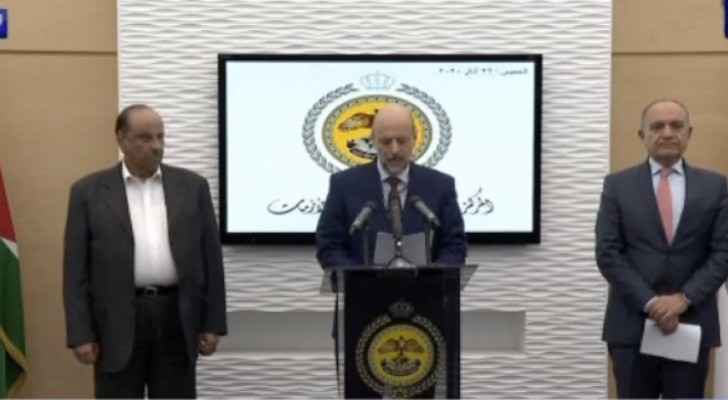 Prime Minister Omar Razzaz has confirmed today that the government will take new measures based on the evolving circumstances to protect Jordan from coronavirus.

The PM made this statement during a press briefing at the National Center for Security and Crisis Management jointly with the Minister of State for Media Affairs, Amjad Adaileh, the Minister of Interior, Salameh Hammad and the Public Security Directorate (PSD) Director Maj. Gen. Hussein Hawatmeh.

"The citizens' commitment we saw yesterday was a source of pride. Our Jordanian citizen has proven time and time again that he is a conscious, committed and responsible citizen," Razzaz said.

He added, "This is what we see around us and this high sense of self-responsibility and self-control is a prerequisite for overcoming this ordeal."

"To be clear, what we announced on Tuesday that groceries, minimarkets and other necessary facilities are allowed to open is still valid. We will keep this decision as long as the owner of the shop and the citizen are committed," the PM confirmed.

He stressed that "those who believe that the government has lifted the curfew, allowing people and cars to move whenever they want and wherever they want, are mistaken," calling on citizens to comply fully with defence orders and instructions.

At the end of his speech, Razzaz announced the activation of the Defence Order No. (3) for the year 2020, which imposes fines and penalties on people who violate the law.

For his part, Minister Adaileh read the full text of the Order:

Issued in accordance with the provisions of the Defence Law No. (13) of 1992.

First: Anyone who violates Defence Order No. (2) for the year 2020 shall be punished by the following penalties:

1. A fine of no less than JD100 dinars and not more than JD500 if the violation is committed for the first time. There will be no prosecution if the violator pays the minimum value of the fine within a week of the date of the violation.

2. Imprisonment for a period not exceeding one year or a fine of not less than JD100 and not exceeding JD500, or both penalties if the violation is repeated.

3. The vehicle used during the curfew shall be seized for a period of 30 days.

Second: Any shop owner, authorized to open his shop, and leaves it open after the permitted hours shall be penalized with a fine of not less than JD1,000 and his shop will be closed for 14 days.

Third: A shop owner who opens his shop without being authorized shall be punished by detention for a period not exceeding 3 months or by a fine of JD3,000 dinars or both penalties.

However, the Interior Minister stressed that "the Defence Order announced by the PM is clear and the sanctions are deterrent, and there will be no tolerance."

Hammad said that it is necessary to adhere to the defence orders in order to protect the homeland and for the safety of citizens.

He added that "things are clear to every citizen now in terms of the danger of the virus and it is time to take the matter seriously. There will be strict procedures."

Hammad indicated that there are no excuses anymore and that the government won the confidence of the Jordanians in its actions.

The Minister called on the Jordanians to abide by all instructions issued by the government in this regard.

However, Hawatmeh affirmed that the PSD personnel is making great human and financial efforts that deserve cooperation and appreciation from the citizen.

He called on Jordanians to abide by all instructions issued, stressing that anyone who violates the curfew, will be penalized and fined.

"From this moment on, we will not relent, pointing out that there are 60,000 to 70,000 police officers deployed across the Kingdom around the clock," he affirmed.

"Sirens will go off at 6:00 pm every day and this would mean a full curfew. We will take deterrent and strict measures against anyone who would be driving their vehicle without having a permit," he concluded.