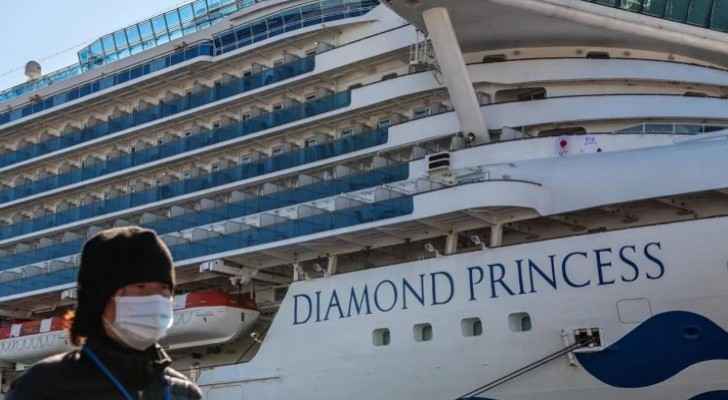 Several hundred passengers who have endured a torrid 14-day quarantine on board a coronavirus-riddled cruise ship in Japan are set to disembark today if they have tested negative.

The Diamond Princess moored in Yokohama near Tokyo has proved a fertile breeding ground for the virus, with at least 542 positive cases, and Japan has come under fire for its handling of the quarantine arrangements.

The initial 3,700 passengers and crew on board from 56 nations have seen a dream cruise turn into a nightmare as they battled fear and crushing boredom on the vessel, some confined to small windowless cabins apart from brief periods of exercise on deck.

"If you and your roommate are both negative and have no fever or respiratory symptoms, you will be able to prepare for disembarkation," Japanese officials told passengers in a letter, adding it would take at least three days to process everyone.

For the travelers, this means a painful wait for test results, which can take several days to evaluate.

"We still need our test results, so we're holding off any celebration yet," US lawyer Matt Smith told AFP from on board. "The feeling is anxious."

British passenger David Abel, who became a minor celebrity with his upbeat video messages in the early days of the quarantine, typified the shift of mood aboard.

"It's all getting to us now and it's not just me, it's the other passengers as well. It's the not-knowing factor that is the real challenge. Mentally, it's now taking its toll. Right now, it's very hard to remain focused on anything," he said.

He later announced he and his wife Sally had tested positive.

The Diamond Princess ship is easily the biggest cluster of positive cases outside the Chinese epicenter, with more people succumbing to the virus than in the rest of the world put together.

With dozens of new positive cases daily, questions have been raised about the effectiveness of the quarantine measures, with passengers allowed to mingle on deck with face masks, and crews passing from cabin to cabin with meals.

"Clearly there has been more transmission than expected on the ship," said Michael Ryan, head of the World Health Organization's health emergency program.

Japanese authorities are now "taking the necessary public health measures with other countries to evacuate people and deal with the follow-up in a different way," he said.

Several countries appeared to lose patience with the on-board quarantine and announced they would send chartered planes to bring back their citizens.

In the first such evacuation on Sunday, more than 300 Americans flew home even though 14 of the passengers had tested positive. They were separated from others in a "special containment area."

Meanwhile, South Korea flew six of its nationals plus a Japanese spouse who had been on the ship out of Japan early Wednesday, the Yonhap news agency reported.

Eight South Koreans who remain onboard will be evacuated if they test negative, it said.

Britain, Canada, Hong Kong and Australia are among other countries that have vowed to repatriate people from the ship but will insist on a further 14-day quarantine period on home soil.

Around 500 people are expected to leave Wednesday, with more following in the coming days, but not everyone will be allowed to get off so soon.

Anyone who has come into contact with someone who later proved positive has their 14-day quarantine period "reset".

In addition, the crew will begin a quarantine when the last passenger has disembarked.

Many crew have refused to speak to media for fear of losing their jobs, but some have broken their silence to voice worries over their conditions, as they work and eat together and sleep several to a cabin.

People in Yokohama appeared supportive of the decision to allow the passengers out despite the virus fears.

"I am sure those people on board must be really worried. I hope they can go back to their normal life soon," said 51-year-old Isamu Habiro.

"As a Yokohama resident, I don't want them to be treated unfairly. I want to cheer for them," Habiro told AFP.