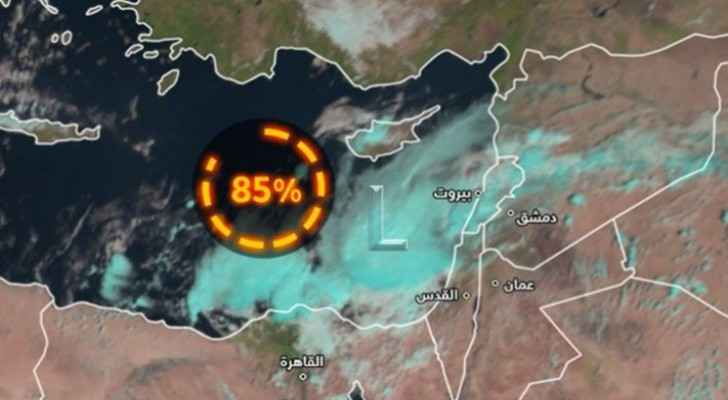 A "Mediterranean tropical depression" is likely to affect the Levant, including Jordan, over the weekend, according to Arabia Weather.

During today's daytime, a slight drop in temperatures is expected, where temperatures will be two degrees below their annual average.

The weather will be somehow cold today in most areas of the Kingdom with a chance of rain showers in parts of the southern and northern Badia region.

The northern and central parts of the Kingdom may also witness rainfall that will likely be accompanied by thunderstorms.

Tonight, the weather will be relatively cold in the highlands, the eastern plains and the Badia.

A slight chance of rain showers is predicted tonight, especially over the southern and eastern Badia region.

On Friday, October 25, 2019, another drop in temperatures is in the forecast, as temperatures will decrease by 2-4 degrees.

Autumn-like weather is predicted in most of the regions, with a chance of rainfall in the Badia region.

On Friday night, the weather is expected to be relatively cold, especially over the high lands, eastern plains and the Badia region with westerly moderate speed wind.

People are warned of the risk of flashfloods in the Badia.

On Saturday, October 26, 2019, temperatures will further drop, becoming 4-7 degrees below their annual average.

The Kingdom is likely to witness autumn-like weather conditions during daytime, as the weather will be relatively cold.

Strong wind is predicted with a chance of rain showers that may be heavy at times.

At night, the weather is expected to be relatively cold, especially over the high lands, eastern plains and the Badia region with northwesterly moderate speed wind.

On Sunday, October 27, 2019, temperatures will remain 3-5 degrees below their average during this time of the year.

The weather is predicted to be relatively cold, with some scattered rain showers in some regions of the Kingdom, especially the northern and eastern areas.

Northernwesterly wind is in the forecast.

At night, relatively cold weather is predicted over the high areas, eastern plains and the Badia region, with westerly wind.

On Monday, October 28, 2019, temperatures are predicted to decrease slightly and they will remain below their annual average.

Autumn-like weather conditions are in the forecast in most areas of the Kingdom, with westerly moderate speed wind.

At night, cold weather is predicted in the highlands, eastern plains and the Badia region.

For people's safety, Arabia Weather warns of the risk of flashfloods during rainfall, especially in the Badia region.