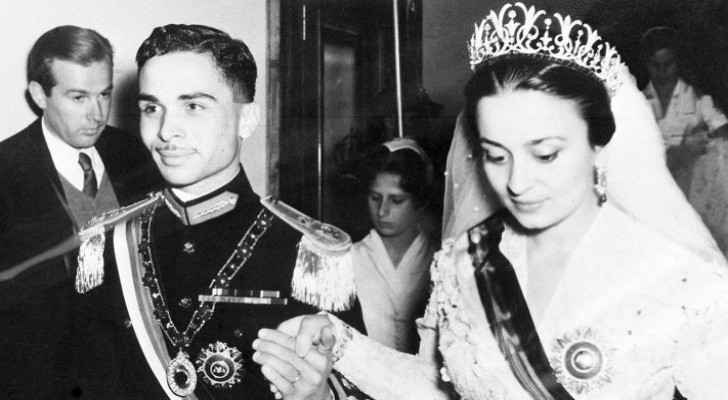 The Royal Hashemite Court (RHC) has mourned the passing away of Her Royal Highness Dina bint Abdul-Hamid, who died on Wednesday, August 21, 2019, in Amman.

Princess Dina's funeral march will take place today's afternoon at the Royal Guard Mosque, while her body will be buried in the Royal Tombs in a special ceremony.

Princess Dina is a Hashemite princess and the former Queen of Jordan as the first wife of the late King Hussein bin Talal and the mother of Princess Alia bint Hussein.

She attended boarding school in England before earning her degree in English literature from Girton College, Cambridge University. She then earned a postgraduate diploma in social science from Bedford College in London. Following her schooling, HRH returned to Egypt where she taught English literature and philosophy at the University of Cairo.

In 1952, while still at Girton College, Dina met her future husband, King Hussein of Jordan, at the home of a mutual relative in London.

King Hussein, 6 years younger than HRH Princess Dina, was a student at the Harrow School at the time. That same year, he became King upon his father’s abdication. Two years later, Hussein’s mother Queen Zein announced the engagement of the young couple.

A daughter, Princess Alia, was born in 1956, while their divorce became final on June 24, 1957, as their marriage was full of discord.

The RHC expressed sincere condolences to His Majesty King Abdullah II, HRH Princess Alia Bint Al Hussein, and the Hashemite Royal Family over the passing away of Princess Dina.