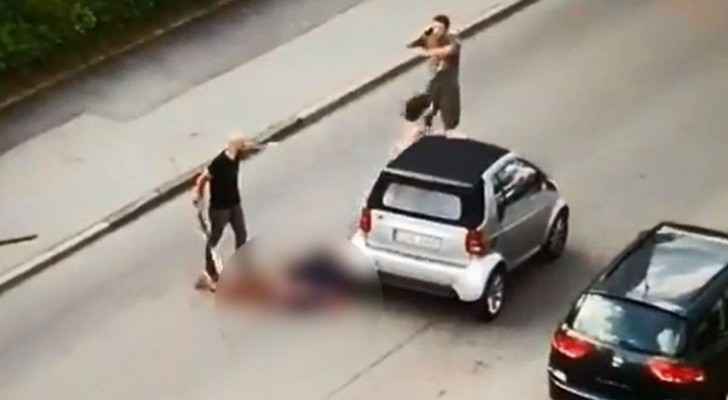 German police arrested a man suspected of carrying out a brutal murder in the streets of the quiet southern city of Stuttgart, according to Russia Today.

The shocking act of cold-blooded murder took place in broad daylight on Wednesday, July 31, 2019, reportedly after a dispute broke out between the killer and the victim.

The 36-year-old victim was hacked to death with a samurai sword by his Jordanian ex-flatmate, DW News revealed.

The Public Prosecution in Germany emphasized that no religious or political motives were behind the murder.

Video footage, purportedly filmed by a witness, shows the 30-year-old killer standing in the street as he repeatedly raises and thrusts a long metal sword-like object towards the ground. The victim's body is obscured by a car, Mirror reported.

The killer was also allegedly heard repeatedly shouting at the victim "Why did you do that?"

Police called to the scene found a "sword-like object" thrown into a bush nearby.

Officers said the two men had shared an apartment in the city until recently.

Shocking images from the scene show the victim's lifeless body laying in a pool of blood near a car in the middle of the road.

Footage of the incident was shared online - gathering thousands of views.