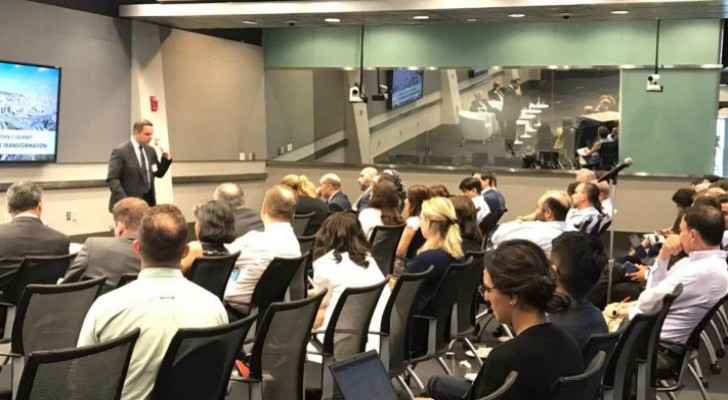 Talks of the Minister of Planning and International Cooperation, Minister of State for Economic Affairs, Mohammed Ississ, held in Washington on Saturday, July 27, 2019, focused on the cooperation relations between the Kingdom and the US government and its institutions.

A series of meetings held with senior US administration officials included get-togethers at the White House, the State Department, the Ministry of Finance, the US Agency for International Development (USAID), senior staff of the Appropriations Committee, the Ministry of Planning and International Cooperation said in a statement on Saturday.

The visit aimed at informing Jordanian development partners on the Jordanian government's agenda and priorities to achieve economic growth, and its efforts to create more job opportunities, raise the citizens' income level, and improve the level of basic services provided by the government, in light of the steps taken by the Kingdom to achieve financial stability and economic resilience, in a bid to find new mechanisms to sustain support and assistance to the Kingdom in the coming period to contribute to the government's efforts to achieve these priorities.

During the visit, the Minister held a series of meetings, during which he briefed US officials on the Kingdom's efforts to achieve financial stability.

In addition, a presentation was made on the reforms and actions taken by the government to achieve economic growth, create jobs in various vital sectors, increase the citizens' income level, and improve the level of public services.

Discussions also went over the priorities and areas of development cooperation within the US economic aid package for Jordan for the years 2019-2020 to contribute to support the government's efforts in the education, health, water and transport sectors, in addition to supporting the public budget.

During the meetings, the Minister thanked US administration for their continued support to the Kingdom and the serious steps taken by the American side to provide additional assistance to the Kingdom over the past years, especially in view of the burdens shouldered by Jordan due to the regional turmoil and the Syrian refugee crisis.

The Minister also stressed the "distinguished" and "historic" relations between Jordan and the US at all levels and in all fields, adding this US assistance reflects the advanced level of the bilateral relations, the strategic partnership between the two sides and the continuous efforts of His Majesty the King to strengthen cooperation with the US, where this support has had a clear impact on Jordan's reform and development process in various sectors.

The American side praised the pivotal role played by His Majesty the King in achieving stability in the region and the Kingdom's efforts to meet the financial and economic challenges and achieve economic growth.

The US side also appreciated the Kingdom's role in hosting the Syrian refugees, which necessitates continued support for Jordan to contribute to alleviating burdens on Jordan, especially hosting refugees, and sustaining basic services for Jordanians and refugees in host communities.

During the visit, the Minister also met with the President of the World Bank Group, David Malpass, where Ississ presented the Jordanian government's priorities for the next stage aimed at achieving economic growth, raising the level of government services provided to citizens, and creating more job opportunities to reduce unemployment rates, especially among the young people, and increasing income levels.

The Minister also briefed Malpass on developments in the reforms implementation and the improvement of the economic situation, through carrying out a reforms matrix for the next five years, which was announced at the London Conference, as Malpass praised the recent economic reforms.

Moreover, the Minister stressed the importance of the World Bank's role in partnership with the Jordanian government in implementing the reforms matrix by providing financial and technical support to this end, and focusing on finding innovative financing mechanisms to support the government's efforts to achieve its goals and priorities.

On behalf of the Jordanian government, the Minister thanked the World Bank for its continuous financial and technical support to Jordan and its participation in supporting the government to implement reforms and development projects in various key sectors.

During the meeting, Ississ stressed the importance of the IFC's role in supporting the Jordanian private sector and implementing public-private partnership projects, through increasing investments in the infrastructure, education, water, transportation, information technology and tourism sectors, which will contribute to increasing economic growth, creating more job opportunities, raising income levels and improving the level of basic services provided to citizens.

For her part, Friedberg announced the IFC's intention to increase its investment portfolio in Jordan by implementing investment projects in a number of priority sectors.

Discussions also discussed the subsequent steps to launch the Public-Private Partnership Development Fund, which will contribute to the preparation of technical and financial studies for investment projects announced at the London Initiative conference in February.

The Minister also chaired a dialogue session at the World Bank with Vice President for the Middle East and North Africa, Farid Belhadj, and Executive Director Hassan Mirza, attended by the World Bank team working on the implementation of the bank's programs and projects in Jordan.

During the session, the Minister highlighted the reforms implemented by the Jordanian government in the past period, which led to financial stability and economic resilience, elaborating on the government's priorities at the current stage seeking to increase economic growth and raise the level of basic services and job creation.

In a separate meeting, the Minister also held talks with the Head of the Middle East and Central Asia Department at the International Monetary Fund, Jihad Azour, and the IMF's staff working on the Jordan program, during which he gave a presentation on the reforms implemented by the government and its future plans that it intends to implement to achieve economic growth to this end.

For his part, Azour said Jordan has made great efforts to maintain its financial stability and implement its recent economic reforms within the reform matrix for the next five years, despite the challenges it faced as a result of regional developments and subsequent influx of refugees, closure of border points, and the high foreign lending costs.