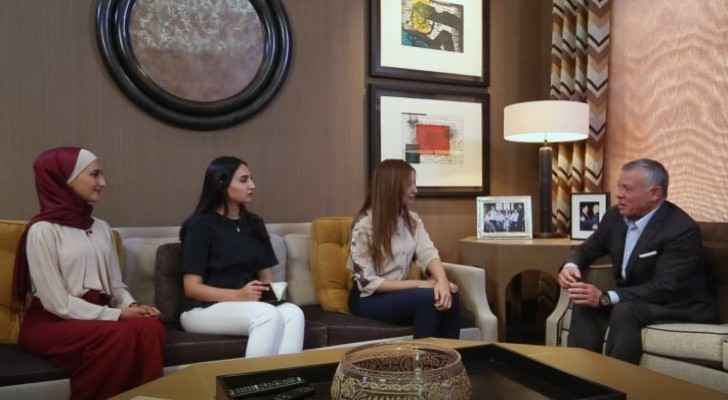 In an interview released on Wednesday, July 17, 2019, with students from the University of Jordan and Yarmouk University, His Majesty King Abdullah talked about his family and personal life.

The interview, released on the two universities' social media pages, covered King Abdullah’s reflections on key events and moments in his life.

His Majesty talked about what makes him angry or happy and spoke about his favorite and least favorite character traits.

The King reflected on the past 20 years since his assumption of constitutional powers and described his feelings when his eldest son, His Royal Highness Crown Prince Al Hussein bin Abdullah II, was born.

His Majesty also spoke about his hobbies, his love for sports, and why he could not compete in the Olympics.

"Jordanians are my brothers and sisters, sons and daughters, and my extended family. Jordan is the most beautiful place in the world," the King said in the interview.

The interview was conducted by students Arwa Sarhan and Luma Hammouri from Yarmouk University’s Faculty of Mass Communication, and Aseel Rawashdeh from the University of Jordan’s Faculty of Law.

Following is a translation of the interview's transcript.

Arwa Sarhan: First of all, Your Majesty, what was your reaction when King Hussein, God rest his soul, informed you that you will be Crown Prince?

His Majesty King Abdullah II: His Majesty King Hussein, God rest his soul, requested my presence and personally informed me that he wants to appoint me as Crown Prince. I experienced a mixture of emotions: surprise, responsibility, and sadness. As a son, I felt that I was going to lose a father, a leader, and a protector. It is a difficult feeling like no other, and Al Hussein was no ordinary man.

Arwa Sarhan: In 2005, the Amman bombings took place. This was the first internal crisis facing Jordan under Your Majesty’s reign. What were your feelings when you received the sad news?

King Abdullah II: I will never forget that day. I felt a mixture of sadness and anger, and I had the sense that there was a grave threat facing our nation that requires our unity and readiness to fight it and counter any new challenges.

Aseel Rawashdeh: Looking at the past 20 years, what situation bothered you or angered you the most?

King Abdullah II: I was extremely angered when the hero Muath Kasasbeh was martyred, may God rest his soul. I was even angrier when some people used this to question Jordan’s position. These people have no idea about the great efforts we exerted to rescue the martyr. They don’t know that we never leave our men—our brothers in arms—behind. They don’t know that we soldiers know how to defend and protect each other no matter what.

Aseel Rawashdeh: To get the full picture, we need to ask about the opposite extremes. We asked what angers you, so please allow us to ask: what makes you happy and gives you the energy to undertake your daily work?

King Abdullah II: Jordanians. Nothing beats the feeling when you are among your people and see them acting spontaneously and sincerely. Youth, in particular, give me the energy and stamina. As long as our young people are eager and motivated, we will all be well.

Luma Hammouri: I would like to take you back to childhood, simpler, carefree times, when we have many dreams and wish that they would come true. What was something you really wanted to do as a child and could not achieve?

King Abdullah II: I used to really love sports when I was young. I was captain of the school gymnastics and track and field team, and I came in first place in a Greco-Roman wrestling competition covering 13 US states. I would have loved to represent Jordan in the Olympics, but I had a car accident in my last year. I was not the driver, but I sustained a back injury, so I came in second place in wrestling that year, and the injury prevented me from pursuing this sport further.

Luma Hammouri: When you address the Jordanian people, you refer to them as the sons and daughters of Jordan, and when you talk to young Jordanians, you say “my sons and daughters”. So I would like to talk about your feelings as a father. How did you feel the first time you saw Prince Al Hussein?

King Abdullah II: It was a great feeling, but difficult to describe. It was, no doubt, a turning point for me, because from that moment onwards, I felt that I had a bigger responsibility as a parent. One of the greatest moments was seeing my father, God rest his soul, holding my son Al Hussein for the first time.

There was a special relationship between King Hussein and his grandfather, King Abdullah. They were very close, and I knew that my father wanted to have that same relationship with his grandson. So sometimes, my father would visit our home in the evening and ask me, “is your son here?”, and when I tell him no, he would take his leave, saying, “I just wanted to see Hussein”. I see that look in my son’s eyes when we talk about his grandfather.

Aseel Rawashdeh: This year marks the 20th anniversary of your assumption of constitutional powers; congratulations on this occasion. Allow me to ask, how have you spent those years?

King Abdullah II: I have lived them moment by moment. People think that when you are king, you get everything you want. I wish that were the case. The reality is far more difficult; the responsibility is enormous and you can see this in my greying hair!

Arwa Sarhan: Your Majesty, the Hashemites give us, Jordanians, a sense of security. What does that mean to you?

King Abdullah II: It adds to my sense of responsibility. It is an extraordinary responsibility to be in charge of an entire country, including the future of its sons and daughters with which I am entrusted.

Luma Hammouri: What does Jordan mean to you?

King Abdullah II: Jordan is my homeland, where I was born and raised. Jordanians are my brothers and sisters, sons and daughters, and my extended family. Jordan is the most beautiful place in the world, in my opinion, and I always strive to improve Jordanians’ standard of living.

Arwa Sarhan: We would also love to know which places you like the most in Jordan and visit frequently.

King Abdullah II: Throughout my military service, I visited every single area in Jordan, north to south and east to west. Each region is unique in its own way, and some areas are amongst the most beautiful in the entire world, but some people are unaware of them. One of the top items on my agenda when I took office was promoting Jordan to show the world what it has to offer. In 2002, I participated in a Discovery Channel documentary, which was unusual at the time for a head of state, but I insisted to be personally involved. We visited the most important tourist attractions, such as Aqaba, Petra, Wadi Rum and Mujib.

Aseel Rawashdeh: I guess a good way to get to know someone is through what they do in their free time, but I don’t imagine you have the luxury of free time. We still hear that you have many hobbies; what are your favourite hobbies and do you have the time to practise them?

King Abdullah II: I have many hobbies but I don’t have the time to pursue them these days. I enjoy riding motorcycles, parachuting, and scuba diving, and for me, it is important to develop this sport in Aqaba because it is one of the most beautiful areas for scuba diving in the world.

Luma Hammouri: What is your favourite character trait in a person and what trait do you dislike the most?

King Abdullah II: The character trait I like the most is honesty—being honest no matter the cost, and not just with others but also being honest with yourself. Jordanians are highly regarded abroad, and Jordan’s reputation goes far beyond its size and borders because Jordanians are honest wherever they are. The character trait I dislike is dishonesty and hypocrisy, which, to me, are cowardly traits that I cannot stand.

Arwa Sarhan: Some people, including us, may have a hard time imagining that the King is a regular person who leads a normal life like us. Has anyone ever said that to you?

King Abdullah II: I hear questions like this a lot, especially from children who think that my life as king is different from anyone else’s. Children are innocent and say things from the heart without filters. Many of them ask me questions about what I eat and drink, and I laugh and tell them I’m just like you! My favourite dish is galayet bandora (tomato stew) and those who served with me in the army know that nothing beats having galayet bandora while sitting on the ground next to an armoured tank. I prefer the simple life.

King Abdullah II: I used to go out as I pleased and meet my friends more often. I had fewer concerns and responsibilities, but now I am responsible for my country and for my people. Back in those days, I used to lead a normal life just like any other citizen or father responsible for a small family.

Aseel Rawashdeh: You are from the 1960s generation. Jordan has certainly changed since then. How much has Jordan changed in your view; what has actually changed?

King Abdullah II: The entire world has developed rapidly. Jordan, praise be to God, was able to keep up with those developments in all areas; for example, we only had one university in Jordan in the 1960s and now we have over 20. All Jordanians should be proud of their great achievements over the past 50 years.

Aseel Rawashdeh: We have spoken a lot about the past; allow us to look ahead now. What does Jordan’s future look like to you?

King Abdullah II: Jordan is a small country but it has a huge impact. Jordan, praise be to God, is greatly respected regionally and internationally, and it is a key player in various regional issues. Jordan has experienced difficult times but has always come out stronger. Jordanians show their true mettle in the most trying times; you see the people standing united, and this is what sets Jordan apart.