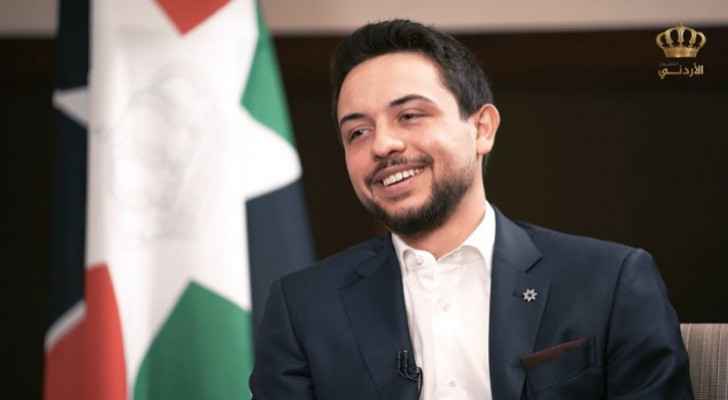 Friday, His Highness Crown Prince Al-Hussein bin Abdullah II held a meeting on Jordan TV on the occasion of the anniversary of the Arabization of the leadership of the Jordanian Armed Forces - The Arab Army.

The Crown Prince began discussing the Arab Army, saying: "We celebrate a historic day in the state’s march, [the memory of the Arabization of the army leadership], and this is an achievement that is credited to my grandfather Hussein, may God have mercy on him, who inherited the love of militarism."

His Highness added, "In the army, I am not a crown prince, I am a lieutenant."

He indicated how much of an honor it is to walk in the footsteps of his grandfather, however, he said that the issues are not what they were back then.

"The most important thing is to carry his principles. My grandfather Al-Hussein was a unique personality."

The Crown Prince noted that he learned from his granfather, how to have an independent throught approach.

His Highness also noted how commendable his father is. He noted His Majesty King Abdullah II's firmness in difficult circumstances while remaining compassionate about humanitarian issues. "He always maintains his clamness and takes the necessary decisions at the appropriate times."

In regards to the pandemic, the Crown Prince said that this crisis is new to the world.

"No one knows what kind of enemy we face."

However, His Highness expressed his pride to all those working in the battle against the coronavirus pandemic. "May God have mercy on all those who have passed away," he added.

The Crown Prince indicated that the core of the challenge in Jordan is the economy, noting that Jordan has gone through successive crises - from the Iraq war to the interruption of gas supplies, to the Syrian crisis and now the coronavirus crisis - all these crises have affected the path of economic reform.

Moreover, in light of this "Jordan’s vision is clear, which is to protect its strategic interests," said Crown Prince Al-Hussein, noting that the Kingdom's position is always consistent towards Arab issues, especially towards the Palestinian cause.

"This is our central issue."

"We have all the basic ingredients for progress. What is required today is to 'roll up our sleeves' and work with each other in one spirit; because the hand of God is with the congregation," said His Highness.