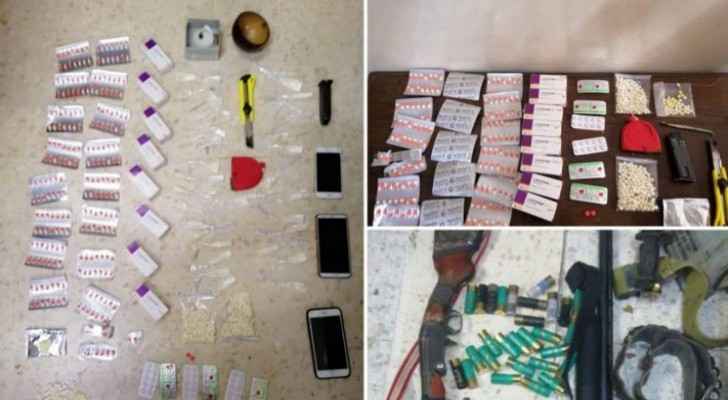 About 17 wanted people and drug dealers were arrested, while a number of firearms and narcotics were seized following two security campaigns rolled out by special teams of the Anti-Narcotics Department (AND) and the Criminal Investigation Department (CID) on Tuesday, July 16, 2019.

Spokesman for the Public Security Directorate (PSD) said in a statement that the AND and CID raided several homes in Na'ur area, south of Amman and apprehended six suspects who were in possession of narcotics. It was later found that four of them were wanted.

However, during another security campaign rolled out in Russeifa earlier yesterday, 11 people, some wanted and some suspected of drug abuse and dealing, were nabbed.

One of the arrests, who was a man of an Arab nationality, was arrested in possession of a firearm and various quantities of narcotic substances.

In Zarqa, a police patrol pulled over a vehicle before arresting two individuals who had two palm-sized sheets of hashish and narcotic pills, while a drug dealer in Irbid was apprehended after a raid was carried out on his home.

Police are investigating the suspects to refer them to the State Security Court (SSC).