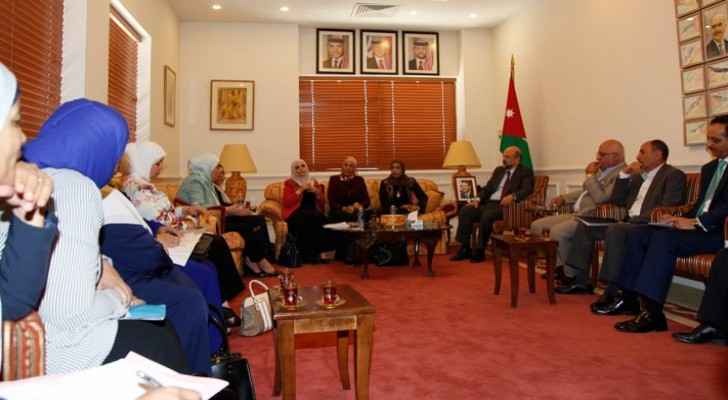 Prime Minister, Omar Razzaz met on Sunday, June 30, 2019, with the chairwomen and members of Jordanian Women Parliamentarians Forum, as part of the ongoing government meetings with members of the Parliament.

During the meeting, Razzaz was briefed on women parliamentarians key remarks, stressing on the government's keenness to follow up on the complaints and observations received from the MPs and their constituencies.

Razzaz pointed to a number of measures that will be taken by the government during the coming period in cooperation with the Lower House, which will include a conference that will be held soon at the level of the governorates in partnership with the Lower House and the Ministerial Committee for empowering women in order to identify citizens' needs and try to create employment opportunities for young people, especially females in the governorates, in addition to naming a liaison officer in each ministry concerned with communication and monitoring observations of citizens and MPs.

Razzaz also stressed that by the end of 2020, the government is seeking to provide 30,000 job opportunities, noting that it has already offered 14, 000 jobs until now.

Chairwomen of the Jordanian Women Parliamentarians Forum, MP Sabah Al-Sha'ar, said the Forum is keen on delivering the voice of women in the 18th Parliament, pointing to the complementary relationship between the government and the Lower House in order to serve the country and citizens.

Al-Sha'ar praised the cooperation of ministries and government institutions with the Forum and the fulfillment of their demands, stressing on the need to conduct regular meetings in the near future between the Forum and the Ministerial Committee for empowering women, so as to enhance women's role in political life.

The parliamentarians presented some issues and problems facing citizens in their constituencies. They called on the government to create job opportunities for young people and implement some service demands such as improving some roads and establishing new schools.