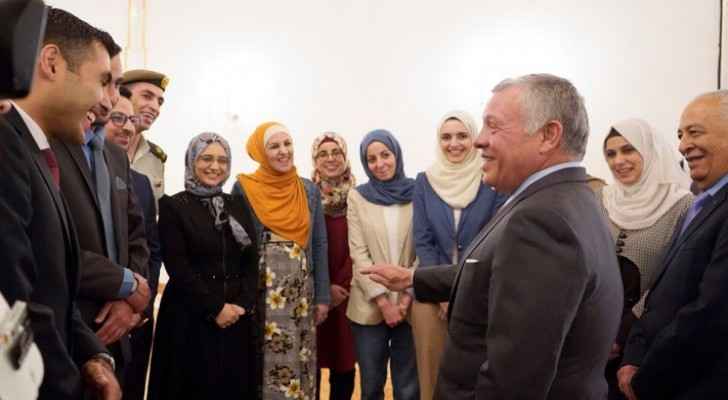 His Majesty King Abdullah on Monday met with a group of young Jordanians from various governorates he had previously met 17 years ago, when they were six graders, during the first school trip to Raghadan Palace.

During the meeting, also held at Raghadan Palace as a surprise for the young Jordanians, King Abdullah and the group recalled their first meeting, and the youth highlighted where they are now, having become judges, teachers, officers, soldiers, engineers, and doctors.

His Majesty commended the personal and professional progress achieved by the young Jordanians over the past 17 years, describing them as bright examples of Jordan’s dedicated youths.

For their part, the youths said the first meeting with the King gave them an incentive to excel and achieve their goals, expressing appreciation for His Majesty’s gesture to reach out and check on them.

Raghadan Palace first opened for school field visits in 2002, under Royal directives on the King’s 40th birthday, to offer schoolchildren insight into the history of political life in Jordan.

This group of youth were the first to visit the Palace and were selected as top academic achievers from various governorates.

Visits to Raghadan Palace have continued since then, with more than 30,000 students visiting from schools around the Kingdom, as well as students from universities and local and international delegations from civil and military institutions.