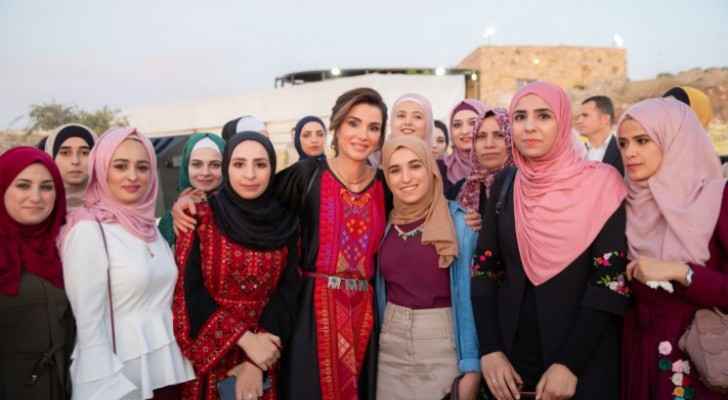 Her Majesty Queen Rania Al Abdullah joined a group of youth and community representatives for iftar in Tafileh on Tuesday, where she lauded the attendees for their remarkable ambition and determination.

Queen Rania relayed His Majesty King Abdullah II’s regards to the Tafileh community, and expressed her warm wishes for the holy month of Ramadan and the upcoming Eid al Fitr.

The Queen also said she was happy to see a group of engineering students whom she recently met with in Amman, who are currently participating in an intensive English-language course.

Organized in coordination with the Office of Her Majesty, the course aims to enhance the employability of fresh graduates in Tafileh by teaching them essential English-language skills.

Noting that their meeting left a lasting impression on her, Her Majesty underscored the incredible potential of Tafileh’s youth, adding that she is committed to helping them develop their skills in order to improve their chances of finding jobs.

"During our meeting, I saw in them the same determination and hope for the future that I see in my children Al Hussein, Iman, Salma, and Hashem. And when I spoke to His Majesty about the youth of Tafileh, I could sense his pride," Queen Rania said.

"The only thing the young men and women here today lack is opportunity, which is what we are working to create," she added.

Under her efforts to support Jordanian youth, the Queen explained that her office is currently working with young men and women from Tafileh to rehabilitate an existing youth center, which will offer professional training to boost the employability of the area’s youth.

The center, which is expected to be completed by the end of the summer, will offer engineering and accounting courses, as well as training in other subjects based on the needs of Tafileh’s youth.

Held at Ein Lahtha Camp, the Iftar was attended by Tafileh Governor, Imad Al Rawashdeh and the eco-tourism camp’s owner, Ahmad Saudi, as well as the Tafileh Governorate Council, members of the Tafileh Engineers Association, students, social entrepreneurs, and representatives of youth initiatives.

Following the meal, Head of Tafileh Governorate Council, Mohammad Al Krymiyeen, and Head of Tafileh Engineers Association, Mahmoud Jarab’a, both delivered remarks in which they thanked Her Majesty for her efforts to develop local communities and equip youth with a competitive edge.

Noting the need to create jobs in Tafileh in order to address unemployment, the speakers also highlighted the importance of investing in human capital and encouraging youths’ self-reliance, while also developing infrastructure capable of attracting foreign investments and supporting small and medium-sized projects.

The attendees also heard from Nasima Qatameen, an engineer taking part in the English-language course, who thanked Her Majesty for creating training opportunities for youth in Tafileh and explained how she and her peers are benefiting from the course. Stray dog keeper: I'd rather be hungry than see them ....

Stray dog keeper: I'd rather be hungry than see ....

Stray dog keeper: I'd rather be hungry than see ....