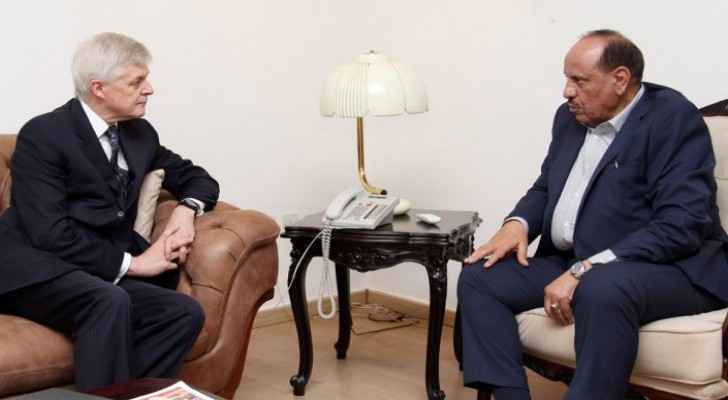 A meeting was held on Thursday, May 16, 2019, between the Interior Minister Salameh Hammad and the British Ambassador to Jordan Edward Okden, where Okden congratulated Hammad on being appointed as the Minister of Interior.

The meeting discussed means of developing relations between the two friendly countries, especially in the security and police fields.

During the meeting, Hammad stressed the importance of benefiting from the mutual security expertise to strengthen the region's stability, combat all forms of crime, fight terrorism, and exchange training and rehabilitation programs, especially in view of the increasing instability in many countries in the region, which need orchestrating international organizations' efforts to counter Mideast turmoil's negative impacts and achieve world peace and security.

Hammad also said Jordan and Britain have close relations in all fields, calling for the need to invest and activate them to achieve ambitions and aspirations of the two friendly peoples.

For his part, Okden stressed Jordan's role in bringing about stability and security in the region as a result of the wise policies followed by the Hashemite leadership and awareness of the Jordanian people, who renounce violence and extremism.

Okden also emphasized the importance of intensifying cooperation programs between the two countries to achieve their common interests.