Safadi: Jordan does not know details of 'Deal of the Century,' our position fixed 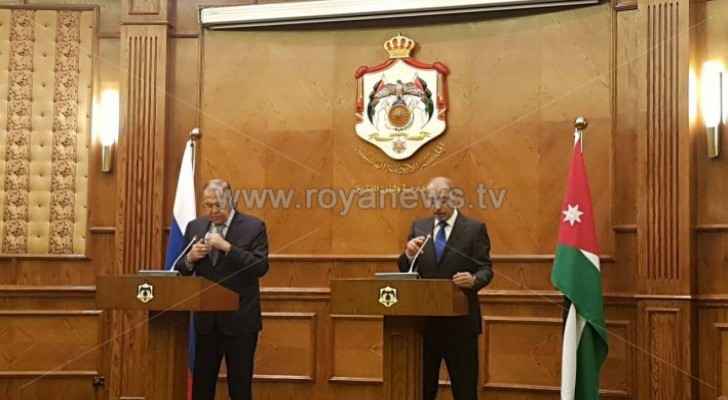 Minister of Foreign and Expatriates Affairs Ayman Safadi held a press conference with his Russian counterpart Sergey Lavrov on Sunday, April 7, 2019, who was in a visit to Amman.

"We do not know the details of the “Deal of the Century,” but the position of Jordan, which is the need to implement the two-state solution, is fixed," Safadi said during the press conference.

"We appreciate Russia's firm position in supporting the two-state solution on the Palestinian cause. The Jordan-Russia cooperation regarding the Syrian crisis was very fruitful and had prevented massacres in the south-west of Syria,” Safadi added.

Safadi continued "We hope to continue working with Russia to resolve the central question of Palestine in the region.”

Foreign Minister Sergey Lavrov said, "We want to discuss the Palestinian cause and hope to help the Jordanian side to ascertain how to implement the resolutions of the United Nations (UN) and the Arab Peace Initiative.”

Lavrov added that “the relationship between His Majesty and the Russian President is good and it paves the way to strengthening relations in various fields.”

Lavrov said that he had discussed with Jordan different measures to repatriate Syrian refugees and dismantle Rukban camp.