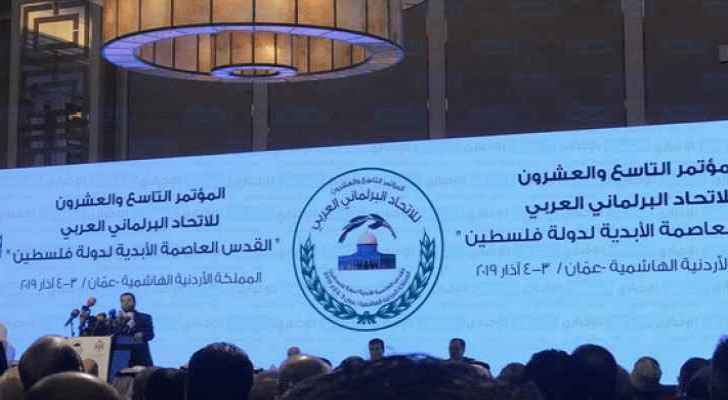 During the 29th conference of the Arab Inter-Parliamentary Union (APU), which was launched on Sunday, March 3, 2019, the 17 participating Arab parliaments and councils adopted, on Monday, the final statement of the conference.

The final statement read the following:

“We are the heads of Arab parliaments and councils gathered at the 29th session of the Arab Inter-Parliamentary Union (APU) in the Hashemite Kingdom of Jordan.

In stressing our commitment to the principles, objectives, and goals enshrined in the charter of the APU and its by-laws, and based on the common history, the unity of status and destiny, and principles of joint Arab action, taking into account the supreme interests of the Arab nation, and in sensing our historic responsibility towards our Arab countries, we stress the importance of discussing the challenges facing the Arab nation, the consolidation of efforts to support the Palestinian cause at all levels, and the need to take the necessary measures to confront any schemes against the Palestinian cause, which threaten the future of the region, its stability and its territorial integrity.

Since the conference slogan is entitled "Jerusalem is the Eternal Capital of Palestine," what we say must match with our actions through the procedures and initiatives we set up.
We must also strive in all forums and platforms to support the Palestinians' steadfastness on their land, along with the victory of the justice of their cause.

First: The APU affirms the centrality of the Palestinian cause as a priority among all other cases and that any solution that goes beyond the Palestinian rights stipulated in the resolutions of international legitimacy and the frameworks of the Arab Peace Initiative, is an unsustainable solution.

Second: Supporting Palestinians' steadfastness in their historical struggle and defending their rights is an inalienable objective and all Arab parliaments must continue providing the necessary political support for Palestinian brothers and the justice of their cause and to preserve the future of generations.

Third: The heads of Arab parliaments emphasize that ending the Arab-Israeli conflict and restoring security and stability in the region can only be achieved by ending the Israeli occupation of all Arab territories and advancing a political process based on the settlement and justice for all cases, which help us announce the establishment of the Arab State of Palestine with Jerusalem as its capital, and to guarantee the right of return and compensation for Palestinians refugees.

Fourth: The participants affirm that the continued Israeli attacks on the Islamic and Christian holy places in Jerusalem and the Israeli occupation's continuous attempts to obliterate the Palestinian identity through prejudice to the historical situation, provoke Arabs and Muslims' feelings and are signs of a more complex phase.
It is necessary to work forward to protect Jerusalem from any attempts aimed at tampering with its historical identity, as it is the first qibla (direction to which Muslims turn in prayer) of Islam and the third holiest mosque.

Fifth: The APU praised the Kingdom’s Hashemite Custodianship over Islamic and Christian holy sites and His Majesty King Abdullah’s efforts in supporting the Jerusalemites’ resilience.

Sixth: The APU commended King Abdullah’s quick steps and response in stopping recurrent Israeli attacks in Jerusalem, the most recent of which was the reopening of the Bab Al Rahma (Gate of Mercy) for prayers.

Seventh: Adhering to the Arab Peace Initiative as a frame of reference for any final settlement of the Palestinian cause is the only way to confront the absence of the international will to ensure a fair solution for the rights of Palestinians.

Eighth: Jordan warns against the unilateral Israeli actions of expanding its settlement through the expropriation of the Palestinian lands and attempts to impose a ‘fait accompli’ policy, which requires more unified Arab stances to counter Israeli attempts to confiscate more Palestinian rights.

Ninth: The participating delegations agreed on the Kuwaiti parliament's proposal to support efforts aimed at achieving Palestinian reconciliation, and adopted a recommendation to form an Arab parliamentary committee to discuss with Palestinian parties means of reconciliation and reaching an end to internal disputes.

Tenth: The APU supports the proposal that will be presented on behalf of the Arab Group in the APU to be held in Doha early next month, which will include the demand for international support to protect Palestinians from Israeli attacks.

Eleventh: The participants emphasize the continued intensification of efforts and the unification of the Arab position in order to address the world, with regard to our central cause (The Palestinian cause), to gain the importance that it must receive before the world countries and in international forums.

Twelfth: The participants affirm the importance of the continuous support to UNRWA, to enable it to continue providing health and educational services to refugees, stressing that refugees, Jerusalem and the right of return and compensation are final-status issues in settling the Palestinian cause.

Thirteenth: One of the most important steps to support Palestinians is through stopping all forms of normalization with the Israeli occupation as stipulated in relevant Arab summits resolutions.

After the Lebanese Parliament Speaker, Nabih Berri disagreed with the idea of calling Jerusalem as "East Jerusalem," the participants agreed on calling it "Jerusalem."
Accordingly, the meeting of the heads of the APU in the 29th session agreed on the theme "Jerusalem is the Eternal Capital of Palestine" and they affirm their commitment and cohesion on these contents and principles.”