Saudi Ambassador: We seek to create new jobs for Jordanians

Saudi Ambassador: We seek to create new jobs for Jordanians 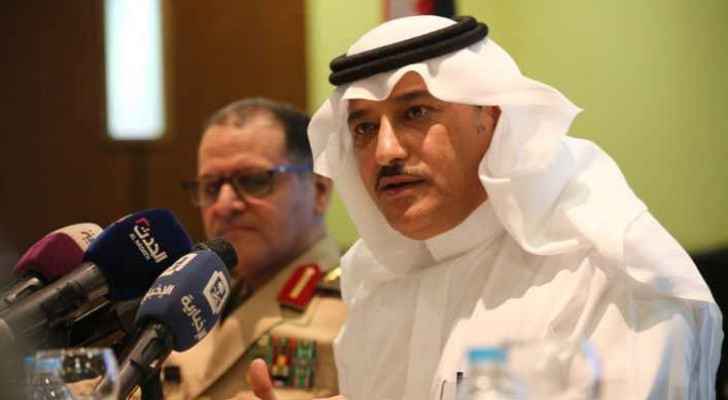 Saudi Arabia’s Ambassador to Jordan, Prince Khalid bin Faisal bin Turki is the Saudi, has stressed on the keenness of the Kingdom of Saudi Arabic to support Jordan in light of the historic brotherly relations between the two countries.

The Ambassador Prince stressed that Saudi Arabia continues to stand with Jordan and that this support will be in new and innovative ways, which will help to create jobs in Jordan. He pointed out that Jordanian expats, along with their families which are residing in Saudi Arabia, are about 450 thousand Jordanians, and that the Kingdom of Saudi Arabia is still the first option for many Jordanian to work abroad.

He pointed out that the Kingdom will seek together with brotherly and allied countries to support Jordan to overcome its current economic crisis, as Saudi Arabia believes that there will be no stability in the region without stability and prosperity in Jordan.

The conference was held at the College of Prince Hussein bin Abdullah II International Studies in the  University of Jordan, under the patronage of the President of the University, the Dean of the College, and in the presence of a number of officials and leaders of Jordanian academia.

The Ambassador reviewed the developments of the Jordanian-Saudi relations since 1932, as well as the developments in the situation in the region, especially with regard to the Palestinian issue, the “Deal of the Century”, and Iranian interference in Arab countries.

He stressed the Kingdom's respect for its distinguished relations with Jordan, warning against "well-known and malicious media” that broadcast misleading reports and news which seek to disrupt these relations.

He pointed out that many of these news and analysis are trying to promote to their followers the deterioration or the decline of the relations, calling on Jordan to communicate with the embassy of Saudi Arabia in order to clarify any matters that may arise.

The Ambassador pointed out that the relations between the two countries are almost completely in harmony on all political, economic and social levels, and that despite the difference and the change of ideologies in the region, the two kingdoms have remained steadfast in their positions based on the values of justice, righteousness and reconciliation despite all the changes witnessed in the region.

He stressed that there was no Jordanian-Saudi dispute, noting that in all his meetings with His Majesty the King, he was aware of His Majesty's keenness to raise the level of relations between the two countries, especially on economic levels, which also arise in his Majesty’s meeting with all Saudi officials.

He also reiterated the Kingdom's steadfast position on the Palestinian issue, stressing that its solution is based on other Arab and regional issues. This was confirmed at the Arab Summit hosted by the Kingdom of Saudi Arabia which was called the Jerusalem Summit.

The Custodian of the Two Holy Mosques, King Salman Bin Abdul Aziz Al Saud, stressed at the Arab-European Summit held recently in Sharm el-Sheikh, that Saudi Arabia's position on the Palestinian issue has been clear since 1948, which affirms that East Jerusalem is the eternal capital of Palestine.

Regarding the “Deal of the Century”, the Ambassador said that since the start of the talks about the deal three years ago, a number of Saudi ambassadors, as well as Jordanian officials, were asked about this deal, and the response was that they had not heard of it nor had any information about it except for what was published in some media outlets which are funded by countries hostile to the Kingdom of Saudi Arabia as well as the countries in the region. He strongly stressed that the Kingdom can not press on Jordan to accept the so-called “deal” as claimed by the media.

He also stressed the Kingdom's rejection of Iranian interference in the affairs of the Arab countries and the attempts in destabilization. He pointed out that the Kingdom's intervention in Yemen came I order to defend Yemen and its Arabism, and to prevent the penetration of Iran into Arab regimes, stressing that the Kingdom would never accept Iranian influence in Yemen from the southern border of the Kingdom, especially in view of its actions in Iraq, Syria and Lebanon, as well as the suffering of the Kingdom due to terrorism for decades.

Regarding Syria, the Ambassador said that the Syrian people have the right to their own self-determination and to the fate of the regime that governs it. The Kingdom believes that the only solution to the Syrian crisis is the political solution. The Kingdom has supported all Arab efforts through the Arab League and has always sought international support through meetings of the Group of Friends of the Syrian People as well as the Syrian Support Group.

On the Qatar boycott, he said that Qatar's current policies resemble an “ulcer in the Arab’s stomach”, referring to the Qatari-Libyan role during Gaddafi's rule, which was discussed in an American court, for a sabotage plot in the Kingdom. He pointed out that these are not accusations but facts which prove the involvement of Qatar in the financing of terrorist groups. The Ambassador also asked why Qatar has not yet paid the amount it had pledged to Jordan, as part of the Gulf grant, the amount of $1 billion and 250 million.

He pointed out that the Kingdom has no objection to any Jordanian contact with other countries that have differences with Saudi Arabia, out of the principle of preserving the national interests of Jordan, stressing that Jordan as a state has a clear and sovereign principle that Saudi Arabia respects and appreciates.

He referred to the cooperation in the military fields between the two countries, in the presence of about 1000 Saudi soldiers receiving training in Jordan, as well as the visits of military delegations which exceeded 35 visits last year.

The Ambassador revealed that he had submitted a proposal to start the development of the University of Jordan’s buildings, infrastructure and Internet services over a period of 10 years, in addition to promoting joint scientific research in the fields of stem cells and the research center at the university.