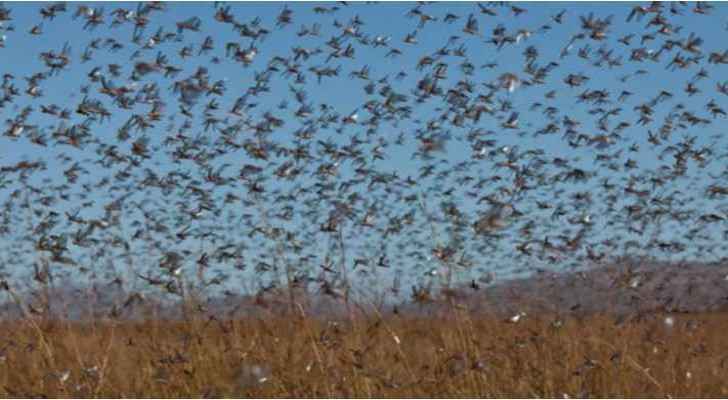 A Locust adult can consume roughly its own weight in fresh food per day, that is about two grams every day, a swarm eats the same amount of food in one day as half a million people eat in a year.

Locusts feed on leaves, flowers, fruits, seeds, and buds. In general, it is difficult to identify the impact of the locust damage on the country’s food balance.

The damage depends on how long the locusts will remain in each area, the size of the locust and crop growth stage. Therefore, it is important to carry out continuous surveys to know the current numbers of locusts so the appropriate control measures can be applied.

Agriculture Minister Ibrahim al-Shahaheda said, during a meeting with army and security services in preparation for potential locust invasion, that there is no impact on Jordanian lands from the spread of the locust, which according to the Ministry's report is about 500 kilometers from Saudi Arabia’s Tabuk region. The Minister stressed that so far there is no trace of locusts in the Kingdom.

The desert locust is one of about a dozen species, it is the most popular kind in the Arab region. They are known for being able to travel long distances, and their females lay about 95-158 eggs at least three times their life.

This type of locust is found in dry desert areas of Africa, Mauritania, Morocco, Sudan, the Arabian Peninsula, Yemen, Oman, and in Southwest Asia.