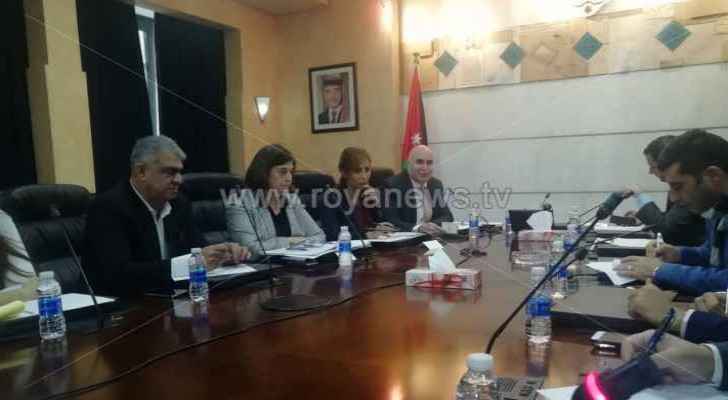 Minister of State for Media Affairs and Government Jumana Ghunaimat and Minister of Investment Mohannad Shehadeh held a ministerial meeting on Tuesday with the media accompanying the Jordanian delegation to the London Initiative to discuss the themes and the preparations made by Jordan to attract investment opportunities and partnerships with the Jordanian economic sectors.

Ghunaimat said that the London Initiative is an important step in Jordan's economic journey. The most important message it is trying to focus on is that the government will not return from London with billions but opportunities to provide Jordan with economic reforms and steps to create an investment environment to attract future projects and opportunities to support the growth of the Jordanian economy.

For his part, Minister Shehadeh said that the London Initiative carries important implications for the national economy, most notably the restoration of confidence in the Jordanian economy and its ability to face the contemporary and future economic periods, adding that Jordan needs to remind the world of the solidity of its economy as it was during previous times.

Minister Shehadeh pointed out that the economic crises affecting Jordan was directly influenced by the global economic crisis followed by the Arab Spring as well as the repeated interruption of Egyptian gas, in addition to the refugee crises and the mounting pressure on public services and the sharp increase in population, all of which contributed to debt.

Shehadeh said that Jordan is on its way to economic reforms through a matrix of plans which when completed will strengthen the Jordanian economy's ability and steadfastness against foreign strikes, stressing that 14 laws have been reviewed which affect the investment environment and have had direct repercussions on investment indicators.

Shehadeh added that exporting services in order to raise economic growth is the priority, as service exports are the focus of the world economy today.

He pointed out that the London Initiative talks will be divided into two parts, the first of which is a discussion regarding the basic needs of the Kingdom, in line with the outputs of the education, achieving employment opportunities and increasing the exports of technical, legal and accounting services as well as health care, as well as international and Jordanian interests in networking and building relationships beyond the London conference.

Shehadeh added that there is a response from many international companies that have relocated their offices to Jordan and have boosted the environment of the country, which is lacking in investment funds of technological innovation.

Minister of Planning and International Cooperation Mary Kawar stressed that the government is exerting its utmost efforts to attract investment and carry out all the economic reforms as to be directly reflected in growth, pointing out that international donors along with the private sector are looking at Jordan's measures and the way debt is handled in providing grants and opportunities.

She said that the government is seeking these steps to achieve monetary stability and financial management of the state by reducing the costs of running a business and increasing competitiveness and reforms in the business market, as well as expanding the social protection network.

Minister Kawar noted that what has been worked on is in the main sectors which stimulate growth in energy, water and transport, in addition to the unified insolvency and procurement law, the promotion of partnership with the private sector, the business environment, economic growth and an investment-stimulating environment.

She stressed that there is a strategy to reduce debt at specific rates each year based on the matrix that was drawn up and planned, and that Jordan will introduce itself to the international community in the light of what has been achieved from the responsibilities carried out, in addition to the embrace of refugees and the economic reforms, along with how to reduce debt and attracting funds.

For his part, the Minister of Industry, Trade and Supply Tariq Hammouri said that the London Initiative is not an investment conference or a donor conference and that we are at the beginning of a long road which includes a clear methodology and specific criteria to achieve a system of reforms agreed upon.

Hammouri pointed to the continuation of work on the stability of the debt and ways of reducing, it as well as increasing growth and continuing reforms and increasing exports and adopting an investment mechanism to enable the output of sustainable projects which are predictable by investors. In addition, a reflection on the national economy and the use of international bodies to study with Jordan the projects within the specifications of a global partnership between the public and private sectors.