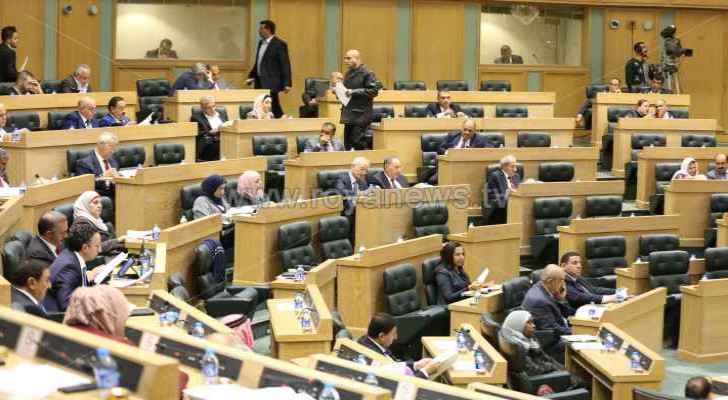 The House of Representatives adopted, during their morning meeting on Tuesday, February 19, 2019, the statement of the Palestine Parliamentary Committee against the violations practiced by the Israeli occupation in Jerusalem and Al-Aqsa mosque / Haram al-Sharif.

The statement, which was read by MP Yahya Al Saud, Head of the Committee, included the following:

The Palestine Parliamentary Committee appreciates the intensive efforts exerted by the Royal Court to remove the iron locks imposed by the Israeli occupation on Aqsa's Bab al-Rahma on Tuesday, February 19, 2019.

The committee also expresses its condemnation and concern for the Israeli occupation frequent attacks against Al-Aqsa mosque and its aggression against worshipers and the Jerusalem Islamic Waqf employees.

Stressing their rejection of such violating practices carried out by the Israeli occupation, The Palestine Parliamentary Committee calls on the Jordanian government to withdraw the Jordanian ambassador from Tel Aviv and expel the Israeli ambassador to Amman out of the Kingdom.

The Committee considers that the acts practiced by the Israeli occupation against the Islamic and Christian sanctities in Jerusalem represent a new and dangerous stage that provokes Muslims' feelings all over the world, which incites racial, regional and sectarian tensions in the region and contributes to the creation of a state of extremism and hatred.

The committee also calls upon all Arab and Islamic parliaments and regional and international forums to take the necessary measures against these Israeli violations in order to prevent the serious effects of these racist practices and to confront the occupation's attempts at imposing the temporal and spatial division of Al-Aqsa mosque.

Oh Allah, free our holy places of the Jews who occupied us and let us die as martyrs at Al-Aqsa mosque. Palestine will be Arab and free again with Jerusalem as its capital.

Jordanian citizen extradition to the US ....