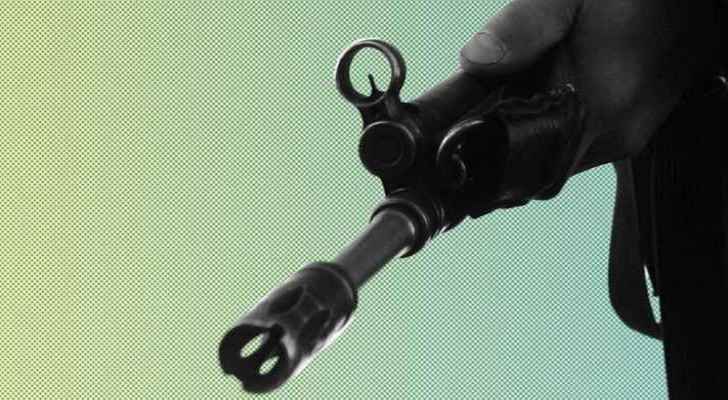 Recent events in Ajloun of shooting at security forces opened the file of illegal weapon possession in Jordan amid demands for restraint and non-complacency with this phenomenon in order not to lose control in the future.

During the protests in Anjara in Ajloun, social media shared footage of intense gun usuage, which was heard in large areas in the province, resulting in the death of a citizen and the injury of several others, including members of the security forces and gendarmerie.

Public Security Directorate (PSD) released pictures of security patrol vehicles damaged by gun shots, not to mention the destruction and burning of a number of government vehicles as well as the partial burning of Ajloun’s governor’s residence.

In the face of efforts to contain the crisis in the province, it is necessary to open the file of illegal weapons and control, which is widespread in many Jordanian provinces and not one in particular.

The law defines weapons as "any machine or instrument intended for the release or extrusion of ammunition by means of air pressure, gas force, the pushing of the return spring or any part of it, including activation devices, and any instruments that accords international conventions as a weapon.

Article 3 of the law states that "No person shall be allowed to deal with arms and ammunition outside the provisions of the law, and any arms shall be prohibited in the centers of governorates, districts, and municipalities.

The law excluded officers and members of the armed forces as well as security services, with the exception of ministers, members of the National Assembly, administrative and state officials to whom weapons were handed under their governmental functions.

The state prohibits the carrying of arms during official and public ceremonies, conferences, meetings, marches, weddings and funerals, or any meeting in which number of people attending exceed ten.

According to the Interior Ministry's law and since its publication in the Official Gazette of 2016, it is prohibited for anyone to deal with automatic hunting rifles, which are operated by a fixed or mobile ammunition store that can accommodate more than one manual or automatic bullet.

The law punish with the temporary hard labor for a period of not less than ten years for all those who deal with arms if found associated with committing crimes against internal or external security of the state.

However, in light of the recent riots in Ajloun, there is an urgent need for the state to protect the country from this dangerous pattern so it does not reoccur in the future.

"The amount of weapons among citizens in various parts of the Kingdom, which is widely visible with any security unrest, is very frightening, and warns of dire consequences," an activist said on his Facebook account.

"The state must disarm citizens through a campaign to set an ultimatum for this extradition, or we will regret it when regret is not useful," he added.

"It is not permissible to take what happened in Ajloun superficially, things are intertwined and multi-angled, Ajloun is the richest province and has the most widespread poverty and is the most stable despite all the difficulties," said human rights activist Hadeel Abdul Aziz.

She pointed out that the proliferation of weapons among people in all provinces, and not in Ajloun alone, is the product of state policies who keep ignoring this phenomenon.

Abdul Aziz considered that "the assault on the state and the riots are disrespectful and must be addressed for fear of chaos prevailing, but not without acknowledging first the defect that sparked the crisis."

Years ago, security experts estimated that the number of licensed weapons in the Kingdom was about 350,000, while the number of unauthorized illegal weapons could be double that number.

Despite the security campaigns to control the spread of weapons, the general results remain modest which is visible in the constant emergence of arms in most quarrels or events and even weddings and celebrations.

Unofficial estimates indicate that more than 1 million weapons are in the hands of Jordanians. This requires the enactment of a new law on arms and ammunition, which will impose sanctions on those who possess unlicensed weapons, accompanied by awareness campaigns and the awareness of the dangers of weapon possession.

Also Read: Razzaz: 'We will not pass on the Ajloun incident without substantive investigation'