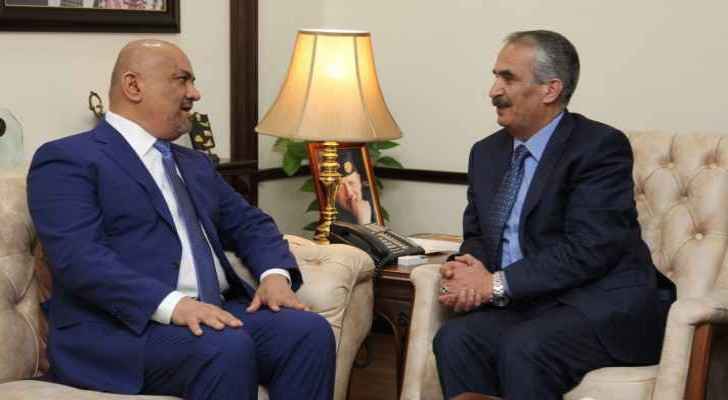 The Jordanian Minister of Interior, Samir Mubaideen, met on Sunday, January 13, with Yemen's Foreign Minister Khaled al-Yamani and his accompanying delegation in Amman.

During the meeting, which was also attended by Yemen's Ambassador to Amman, Ali Al Omrani, the officials reviewed the measures taken by the Jordanian Ministry of Interior to ease the entry of Yemenis into the Kingdom, especially those coming in for medical tourism, in a way that would comply with Jordan's security requirements.

Mubaideen affirmed Jordan's keenness on the unity of the Yemeni people, and its hopes for the territorial integrity, security and stability of the war-torn country.

He also pointed out that the security and political stability witnessed by Jordan is due His Majesty King Abdullah II's wise vision and moderate political policies, which have made Jordan a model for coexistence and tolerance, as well as becoming a key player in the fight against extremism in the Middle East and worldwide.

For his part, the Yemeni minister stressed his country's keenness on developing bilateral relations between the two countries and to benefit from Jordan's expertise in various fields.

Jordanians: PM declared Thursday a day off to celebrate ....