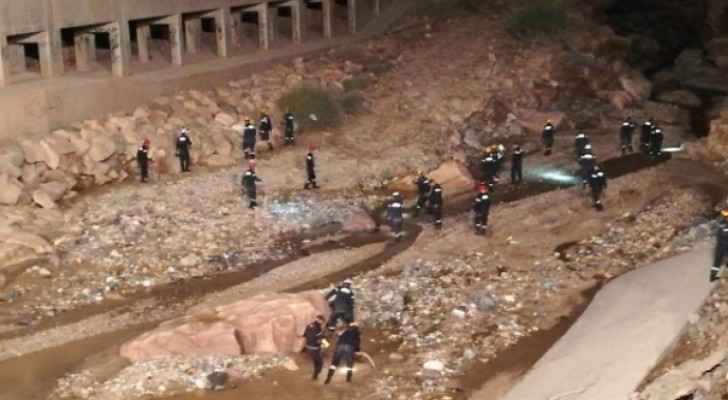 During the fourth public hearing of the Dead Sea case at the Cassation Court in Amman, that was presided by Judge Mohammad Tarawneh, the parents of the victims recalled moments of grieve on Sunday, November 25, 2018.

The eight suspects, who were released on bail on Thursday, November 21, did not attend the session and were represented by their lawyers.

Emad Hammouri, the father of Omar, one of the 21 children who passed away last October in the deadly floods of the Dead Sea during a safari school trip, said that he allowed his son to go on the trip because he thought that Dead Sea's weather is different from Amman's.

"I was searching for my child's body between body bags… his body was in the last one," Hamouri noted.

The witness, who filed a complaint against the eight suspects along with other official and unofficial personnel who might be proven responsible for the incident directly or indirectly, said that he was not informed about the safety measures taken.

While pointing out at one of the teachers, Omar's Father said "she did not inform us about the availability of safety tools … I did not receive the trip's programme… My son gave me the parents' permission a day before the trip."

"All I knew was that my son was going on a school trip, not an adventure. Omar was not wearing a helmet, he had four cuts in his head" he added.

However, Tahseen, the father of Nabaa, an Iraqi national sixth-grader victim, said that his daughter told him that the trip was to Amman, not the Dead Sea, "I allowed her to go because she said it was in Amman."

The court also listened to the testimony of some survivals and their parents as well.

The mother of Jumana, a survival, confirmed that she received the trip’s programme and provided it to the court, noting that the trip was scheduled on Tuesday but was delayed to Thursday, the day of the incident.

While, the mother of Sama, a seventh-grader survival, said that the documents provided by the school two days ahead of the trip stated that "safety measures will be provided at the adventure trip."

Tuleen, one of the students who survived said that the supervising teacher, Yasmeen, who passed away in the accident, asked the tour-guides about the availability of safety tools but received a negative answer.

"We entered the Wadi despite not having safety tools because the tour-guides said that we won't need them," Tuleen explained, adding that they did not face any difficulties when they were walking in the wadi. “We were out of the stream and taking a rest when we heard others screaming flashfloods! The water swept others, I was only injured in the shoulder," Tuleen elaborated.

Adnan Abu Sido, the father of Sarah who was mistakenly identified by another family as theirs due to her body being heavily injured, said that he did not know that his daughter was going Zarqaa Wadi Ma’in on an adventure trip. I did not consent to the trip because of the weather conditions."

Abu Sido said that he contacted the school's secretary and asked her to cancel the trip but she said that she checked the weather forecast and was positive all is fine.

The court decided to hear to the other witnesses in the next hearing, on Tuesday, November 27, 2018.