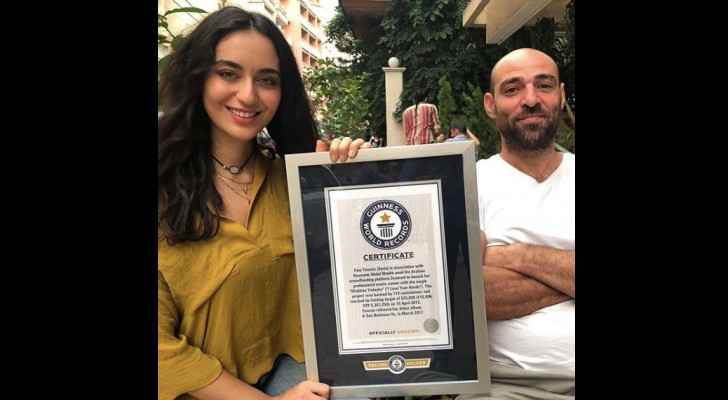 Syrian singer Faia Younan has just added another achievement to her impressive CV: the young starlet has entered the Guinness Book of World Records as the first Arab artist to crowdfund a music video.

Faia used the crowdfunding platform Zoomaal to finance the making of the music video for her 2015 single “I Love Your Hands.” Her fans helped her crowdfund $25,000.

“In February 2015, we knew we had to release my debut single but we didn’t know how. Houssam @houssak my awesome manager suggested we use an online crowdfunding campaign to fund it. At that time I had not heard of the concept, and didn’t know what waters we were diving into especially that it hadn’t been done before. I saw that other artists used it but they were established! They had built their audiences for years... So what? we did it,” Faia wrote on Instagram.

The 26-year-old continued: “In the first days, I was overwhelmed with so much love and support (still am). Day after day week after week contribution after contribution we reached our goal and eventually produced “Ohebbou Yadayka”. This song will always have a special place in my heart since it’s made by you. It was co-produced by wonderful people who believe in art and music.

“There are two people that made this campaign extra possible: @omarjhabib & @mansaz80 ???????? I love you guys. This prize came as an emotional reward for the risk we took, but it’s not only ours, it belongs to every soul that was part of it. I look forward to all the years ahead, full of love, faith and music with you. #[email protected] @[email protected]”

A team of about 119 people made “I Love Your Hands” come to life.

Faia told the Syrian Arab News Agency (SANA) that the success of the funding campaign “was due to the emotional dimension it carried as it conveyed the Syrian voices of resistance to destruction and the war of terrorism, specifically the cultural war against Syria, which aims at destroying its identity and civilization.”

The video has been watched more than 12.6 million times on YouTube since first uploading it in June 2015.

Other artists whose names made it into the Guinness Book include veteran Syrian singer Sabah Fakhri, for singing for ten consecutive hours in Venezuela in 1986.

The iconic late Lebanese singer Sabah was the first Arab artist to ever break a Guinness record as the “Arab artist with the most contributions to the global music and film industries.”

We’ve had the pleasure of speaking to Faia in person in July. You can hear everything the lovely singer had to say by watching her interview below.