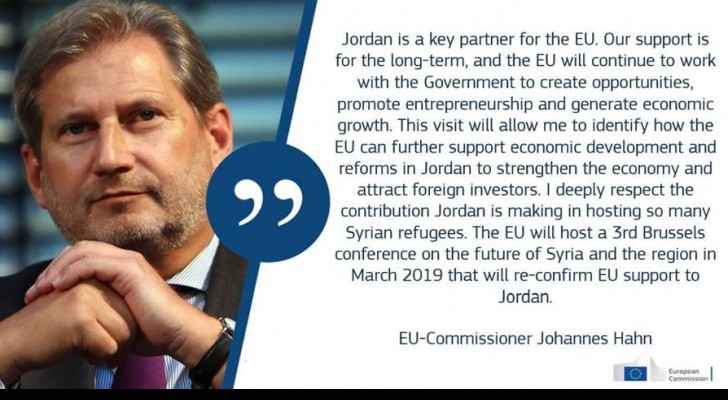 Hahn’s visit, which is scheduled on Sunday and Monday October 21-22, 2018, is expected to reaffirm Jordan’s vital role in maintaining regional stability and to endorse EU’s support to the Kingdom plans in developing and reforming its economic status as well as to discuss future partnerships between the two parties, which aim to benefit Jordan in its reform process.

EU will also be announcing and signing its most recent funded programme that intends to enhance the rule of law and support reforms in the Jordanian justice sector.

Hahn will be meeting with His Majesty King Abdallah II as well as with various governmental officials; including Jordanian Prime Minister Omar Razzaz, Minister of Foreign Affairs Ayman Safadi, Minister of Planning and International Cooperation Mary Kawar and Minister of Information and Communications Technology Mothanna Gharaibeh.