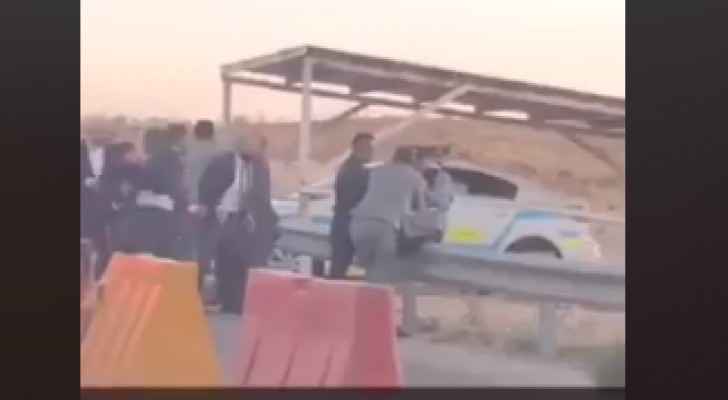 An on-duty police officer was admitted to hospital yesterday after being physically assaulted in broad daylight by a group of men in the middle of a busy street near Queen Alia Military Hospital in Amman, Jordan.

A video camera (footage attached) captured the encounter in which around four men jumped on top of a Central Traffic Sergeant who was standing on the side of the road next to his patrol car and started throwing punches at him.

Details later revealed that a wedding-car-parade, better known as Fardeh*, was affecting the flow of traffic. Being on site, the Sergeant ordered the drivers causing the commotion to move their vehicles.

After refusing to abide by the law and cooperate with the authorities, the Sergeant was about to issue the drivers a ticket when, suddenly, some of them charged at him.

An official source confirmed that the Sergeant is now receiving treatment and that his medical condition is stable.

Fardeh [færdɛh] is a parade of tens of cars moving together from one agreed-on location to another. It usually occurs in main streets of the city while drivers continuously honk in synchronicity. The Fardeh (also known as Mawkeb) is mostly associated with weddings and graduations and increases in frequency during the summer season. A Fardeh is criminalized by law as it endangers the safety of both drivers and pedestrians. Unfortunately, the practice is still not frowned upon by many Jordanians.