PM Razzaz in no rush to form new government 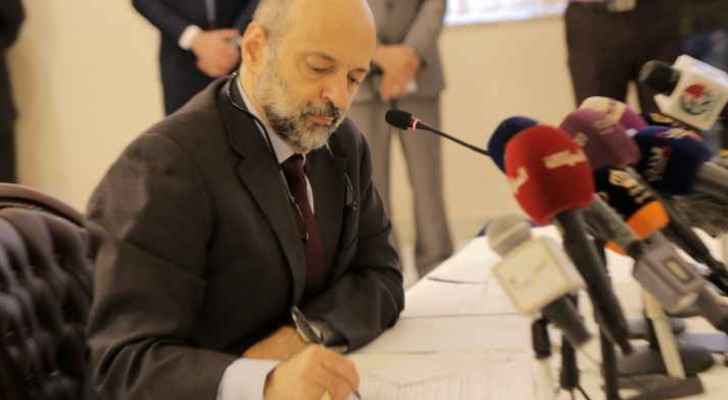 Newly appointed Prime Minister, Omar Razzaz told the General Secretaries of Jordanian political parties during a meeting on Monday morning that he will not rush into forming a Cabinet.

“We must be aware that the quality of [public] services does not meet the expectations of citizens,” Razzaz pointed out during the meeting which was held in Al Hussein Youth City in Amman.

The PM insisted that a technocratic government would not suffice, adding that the country now needs ministers that are aware of the social and political repercussions their decisions have on citizens.

Razzaz also commended the maturity of both the security forces that handled the demonstrations and the youth involved in the protests, adding that nothing frustrates the latter than the lack of job opportunities after completing their studies.

He stated that the meeting initiated a new phase between the government and political parties, which are integral component Jordanian politics, stressing that political pluralism is a distinguishing trait of the approach the government seeks to adopt.

Razzaz confirmed that the previous government had not allocated enough time to discuss the Income Tax Bill with the people and pointed out that the bill cannot be fixed in isolation but rather as part of an overall reform that also tackles the sales tax and its disproportionate application on all segments of society.

“When I criticise, I first and foremost criticise myself and say that referring the bill to the representatives was a miscalculation,” the PM admitted.

He clearly expressed the limit of his abilities stating “I don’t have a magic wand and I will not be able to fix the accumulated problems within days or weeks.”

Numerous secretaries made remarks and addressed Razzaz with their demands. Justice and Development General Secretary, Natheer Arabiyat, insisted that Razzaz’s government should abide by the directives in his letter of designation and involve political parties through dialogue and participation.

In addition to tax reform, Rula Alhroub, from Jordan Stronger Party, urged the government to improve its decision making process, channel their efforts into battling corruption and pay more attention to civil liberties.

Furthermore, Zamzam political party called for the drafting of a new electoral law that encourages inter-party competition rather than focusing on regional affiliations.

Finally, Abla Abu Elbeh, heading the Jordanian People Democratic Party, called for the government to halt projects that target Jordanian sovereignty and endanger the Palestinian cause.

The meeting was one of many the prime minister is expected to hold in advance of forming a government. He is also scheduled to meet with members of the lower house of parliament today.