Fadel Hmoud and Hussain Hawatmeh during the press conference. (Roya) 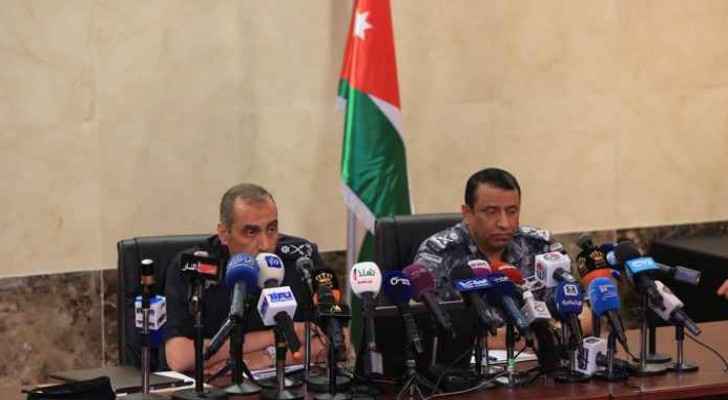 Director at the Civil Defense Department, Fadel Hmoud, announced in a press conference on Monday that 42 security officers have been injured during the mass protests across the kingdom, pointing out that most of the injuries were due to fireworks and firecrackers.

The security handled 49,000 protesters over the period of four days and the number of protest sites peaked on Sunday to reach 175 separate locations, according to the statement.

On Thursday alone, the security forces dealt with 45 protest sites, which were attended by over 2,500 individuals.

The number of protests more than doubled on Friday to reach 125, where 14,000 participants voiced their descent.

During the four days, 60 protesters were arrested, of whom eight were non-Jordanians of Arab nationalities.

Gendarmerie Director-General, Hussain Hawatmeh assured the press that the situation was under control but expressed that it was unacceptable for protesters to resort to violence, target security forces, or destroy public or private property.

Hawatmeh pointed out that the security apparatus respects citizens and is there to protect them but that officers will escalate the force they use in order to maintain order.

On the other hand, he stressed that tear gas had not been used throughout the protests and asserted that videos shared on social media purporting that were false.

Protests in Jordan have been taking place after the break of fast until the early hours of the following day in order to demand the repeal of the Income Tax Bill and the resignation of the Cabinet.