Jordan has lips sealed on ‘deal of the century’: Momani

The Israeli PM Benjamin Netanyahu with US President Donald Trump and his senior advisor, Jared Kushner. 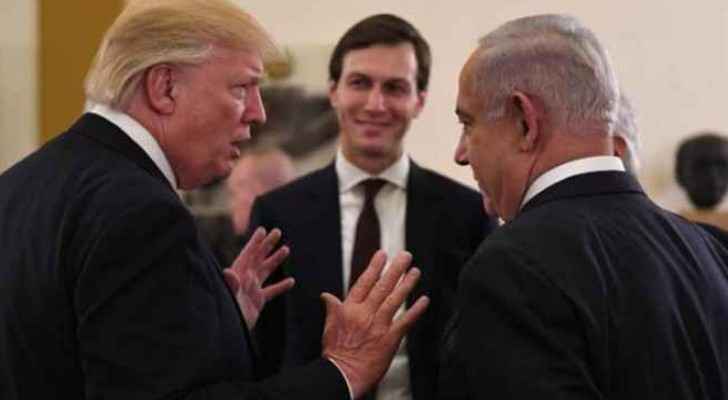 The Jordanian Minister of State for Media Affairs, Mohammad Al Momani, told Roya that Jordan will refrain from commenting on the so-called “deal of the century” before it is finalised officially.

His remark addresses circulating rumours about a US peace process proposal in the Middle East dubbed “the deal of the century”, which is claimed to have the potential to end the 70-year-long Palestinian-Israeli conflict.

Momani stressed that the kingdom insists on the two-state solution that will support an independent and sovereign Palestinian state, on the 1967 borders, and with East Jerusalem as its capital.

Neither the US or Saudi Arabia have officially committed to the deal. While it is said to be proposed by the Saudi Prince Mohammed Bin Salman (MBS) to the Palestinian President Mahmoud Abbas, Saudi Arabia denied its support to the plan. On the other hand, the White House said they need months to finalize their peace plan.

The deal’s details were conveyed to the Palestinian side by MBS in December 2017. The New York times described the deal in December by saying it is “tilted toward the Israelis.. a plan that no Palestinian leader could ever accept.”.

It also calls for the recognition of Israel as a Jewish state with Jerusalem as its capital. It stipulates the foregoing of the right of return of Palestinian refugees and suggests that Abu Dis, a suburb of East Jerusalem, could be the Palestine’s capital.

Saeb Erekat, Palestinian Authority chief negotiator and secretary general of the Palestine Liberation Organization told the Anadolu Agency earlier in January that Palestinians will take the US-proposed deal to the International Court of Justice (ICJ).