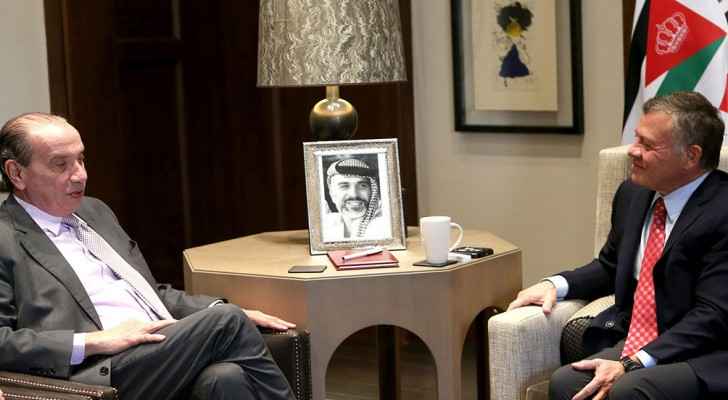 Yesterday, His Majesty King Abdullah the Second, the Minister of Foreign and Expatriate Affairs, Ayman Safadi, and Prime Minister Hani Mulki hosted the Brazilian Foreign Minister Aloysio Nunes in efforts to strengthen relations between the two countries. They also discussed a variety of issues including economic and regional affairs.

The Jordanian King was given a letter from the Brazilian president enclosed with ideas to improve bilateral relations between. This shows the clear intent from Brazil in their desire to strengthen cooperation between their countries.

The Jordanian King and Foreign Minister Nunes also discussed Jordan’s quintessential geographical location, making it an ideal gateway to Asia and Africa. They also spoke of possibly signing an agreement to increase investments between their countries, saying how the Mercosur economic bloc could benefit Jordan. The bloc unites countries economically such as Brazil, Argentina, Uruguay, and Paraguay.

The Minister of Foreign and Expatriate Affairs, Ayman Safadi,met with Nunes. Both ministers were able to sign a technical cooperation agreement in regard to agriculture, health, education, professional qualifications, and other areas.

In terms of regional issues, Minister Safadi expressed a need to fortify efforts in relation to the peace process between Palestinians and Israelis. Brazil agreed with Safadi in his view of resolving the conflict by way of a two-state solution, Palestine’s establishment of an independent state, and East Jerusalem being its capital using the 1967 borders. Safadi was grateful for Brazil’s support, in addition to their recognition of Palestine as a state, as Jordan’s goal is to create peace, safety, and security for all in the region.

The King and Minister Nunes also discussed efforts to combat terrorism in the region in an all-encompassing strategy.

Prime Minister Hani Mulki also was able to discuss possible exports (chemicals and fertilizers) to Brazil and increasing tourism between the countries with Minister Nunes. Mulki also mentioned that Jordan has reached maximum capacity for accepting refugees into the country due to economic pressures and insufficient assistance from the international community.

Lastly, the ministers mentioned how important it was to continue to support the United Nations Relief and Works Agency (UNRWA) as the services from this agency are critical for refugees. An UNRWA conference will be held on April 15 requested by Jordan, Egypt, and Sweden. Jordan was sure to discuss this as well with Brazil’s counterparts.

Brazil's Christ the Redeemer lit up with flags of ....

Brazil's Christ the Redeemer lit up ....