Ancient sea port dating back to 650 AD discovered in Aqaba

An excavation team searches through the remains of Ayla. (Roya) 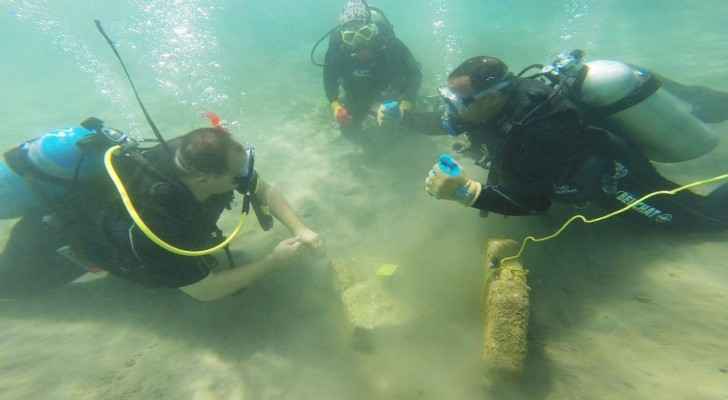 Deep in the Gulf of Aqaba, an archaeological expedition uncovered traces of the early Islamic city of Ayla, which also hosted a sea port - the first sunken marine structure to be discovered in Jordan.

During a press conference on Monday, the Royal Marine Conservation Society of Jordan (JREDS) officially announced findings from the expedition.

The Executive Director of JREDS, Ihab Eid, said that the society seeked the expertise of local experts from the Department Of Antiquities and experts specialized in the field of submerged antiquities from the Egyptian Department of Antiquities to accurately estimate the age of Ayla, and to produce studies and reports on the findings. Excavationists found a sea port that was built in 650 AD during the Islamic Umayyad period, and prospered under the Abbasids (750-970) and the Fatimids (970-1116) until its decline in 1116 AD, due to earthquakes and attacks by bedouins and Crusaders.

The port boasted a 50-meter-tall and eight-meter-wide barrier to shield it from seawaves. It was connected to a solid mud floor extending out to the beach, interspersed with a two-lane corridor between the port and the sea gate of the city, past stores and shops to transport and store incoming and outgoing goods to the port. According to the experts, the port likely included other facilities such as a special kiln for the production of pottery used for transporting goods, as well as areas for the maintenance and manufacturing of ships and sails.

The stone anchors found there are predicted to have been produced at the site.

By studying the pottery, stone and metal shards, it is possible to identify the extent of the activity of the port, which linked the land trade route for merchants coming in from the Levant, the Hijaz, Egypt and the Maghreb, and the sea route that connected India, East and South Asia and Africa to Ayla.