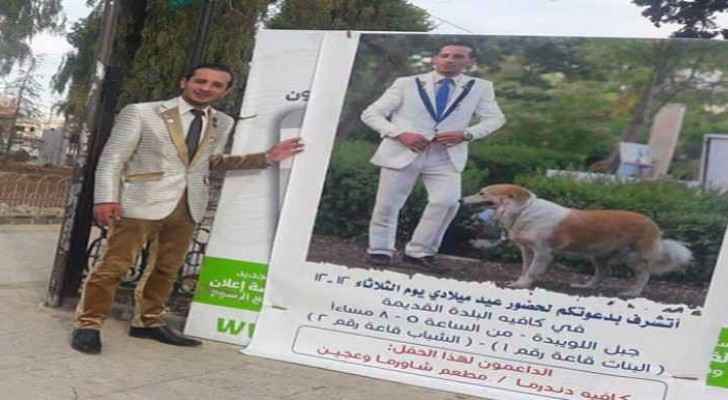 Get your party hats on for the biggest birthday bash to hit Jordan this year!

An invitation for a birthday party in Al-Webdeh, Amman, has gone viral among Jordanians, after Webdeh local Ali Sarsour posted lifesize posters of himself and his dog advertising his birthday party.

The image shows the birthday boy standing beside the giant invitations, which were hung up throughout the streets of Webdeh, inviting people to his birthday bash on Tuesday night in a local cafe.

“I am pleased to invite you to my birthday party on Tuesday, 12/12. In the Old City Cafe- Jabal Al Weibdeh, from 5pm to 8pm. Girls will be in Hall 1, and Boys will be in Hall 2.
Sponsors for this party are: Dundarma Cafe & Shawarma w Ajeen Restaurant.”

According to the invitation, the party will be segregated based on gender, provoking social media users to call for Sarsour to allow for a mixed party, to achieve “gender equality”.

Translation: By my name and the youth of the country, I ask Mr. Ali Sarsour to make his party ‘gender-mixed’, to back ‘gender equality’, and let the party’s Logo be: “Alloush [Ali] brings us together”.

Adding another political dynamic to the event is Sarsour’s decision to postpone his party in the wake of U.S. President Trump’s controversial announcement recognising Jerusalem as the capital of Israel. While Sarsour’s actual birthday is on Saturday, he posted on Facebook saying that he had decided to move the party to Tuesday, “in solidarity with the people in Palestine and Jerusalem.”

Translation: #Reminder, there is a thing that is more important than my birthday, which is Jerusalem, the Palestinian capital. Everybody knows that I postponed my birthday party which was on Saturday. In solidarity with people in Palestine and Jerusalem

And in case I did it [on Saturday], I would not be the only one..

Sarsour is a well-known figure in Webdeh, renowned for his elaborate suits and canine companion. With talk of the event circulating on social media and among Webdeh’s locals, it is expected to rack up a large (and segregated) crowd.